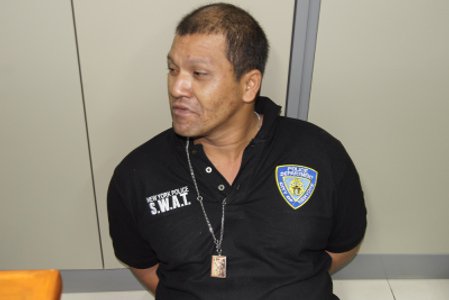 At the time of his arrest, at about 6pm, Mr Wesarat was apparently high on methamphetamines and wearing a black polo shirt identifying himself as a member of the New York City Police SWAT team.

The drugs were stashed in a variety of containers, including a box of Scotch brand bird nest beverage.

Along with the ya bah pills was a small bag of ya ice (crystal methamphetamine) weighing 2.85 grams.

Mr Wesarat initially said the packages contained a present for his boss in Phuket Town and that he was reluctant for police to open it because he didn’t want to diminish the beauty of the packaging.

Both men were charged with possession of a Category 1 narcotic and conspiracy to sell.

Mr Wesarat said he was only transporting the drugs and had no intention of selling them himself, but admitted that 73 of the pills belonged to him for his own consumption.

Mr Wesarat told police he was currently out on bail after being charged with possession of ya Ice in Kamphaeng Phet province.

He has a scheduled court appearance in the northern province on July 29, he told police.

Mr Wesarat also confessed that the intercepted shipment represented the remainder of a much larger order and that he had driven 24,000 yah bah pills onto the island on July 22.

Despite the damning nature of the confession, police refused to accept his words at face value as the suspect appeared to be under the influence of drugs.

Trawler sinks off Phuket after collision with barge