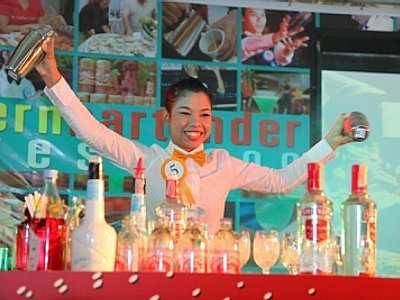 PHUKET: The Phuket Food and Beverage Show will take place starting on Friday at Central Festival Phuket’s HomeWorks complex on the bypass road.

The three-day event will feature a wide variety of events including contests and exhibitions in bartending, cooking, linen folding, wine butlering, ice carving and so on.

The event, sponsored by Smirnoff vodka, will run from 11am to 10pm daily.

The event is organized jointly by the Andaman Food and Beverages Managers Club (FBMC Andaman) and the Thai Federation of F&B Management Clubs & Associations.

The Tourism Authority of Thailand (TAT) is promoting the event.

Bangornrat Shinaprayoon, director of TAT South Region 4 Office in Phuket Town, said, “This will be the 27th Phuket Food and Beverage Show. Activities are aimed at helping food and beverage service providers to reach international standards. This will also be a great chance for those in the F&B industry to improve their skills.”

FBMC Andaman Chairman Sakda Wareeporn said the wide range of activities and cooperation from so many different groups helped to make the event an annual highlight for F&B workers in the region.

One new activity to be introduced at this year’s event will be the “Ete Ice Cream Creation Contest”.

Aveeporn Piyadamrong, the public manager of contest sponsors Ete Ice Cream, told a press conference at The Metropole Hotel earlier this month that the winning creation would be featured on menus in Ete home-made ice cream shops all around the country.

Another highlight is expected to be ‘flair’ cocktail-making by bartenders from across the region.

This year’s event also happens to coincide with the Patong Cocktail Marathon 2010, that has its grand opening on Soi Bangla in Patong on Friday night.

For information about the Phuket Food and Beverage Show contact FBMC Andaman at 076-378165 or visit: www.phuketfbclub.com