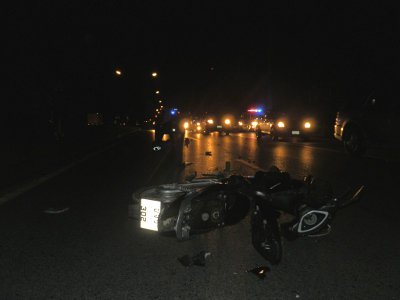 PHUKET: A British expat living on the island died last night after the motorbike he was riding slammed into the back of a pickup truck in Thalang.

Police named the deceased as Christopher Ian Hart, 44, from Littleborough* in the United Kingdom.

Lt Col Somkit Kaosung of the Thalang Police was notified of the accident at 9:34 pm.

Officers arriving at the scene, about 300 meters from the Baan Nai Klum u-turn on Thepkasattri Road, found Mr Hart’s Honda Wave motorcycle and a Toyota pickup in the middle of the road.

Mr Hart was pronounced dead shortly after 12:44am.

The pickup driver, 37-year-old Chatri Saejung, told police that he exited the Tesco Lotus Thalang shopping center and was approaching the Baan Nai Klum u-turn when the accident happened.

“He heard something hit the back of his pickup. He got out of the vehicle and found Mr Hart and his motorbike on the road,” said Col Somkit.

“The pickup truck and the motorcycle were taken to Thalang Police Station. We are continuing our investigation into the accident and need to question more witnesses,” he added.

Among the debris found scattered on the road was a single sharp knife. Police have yet to determine who owned the knife and how it arrived at the scene.

* Correction: The original report stated that Mr Hart was from Loughborough in the UK. The error is regretted.