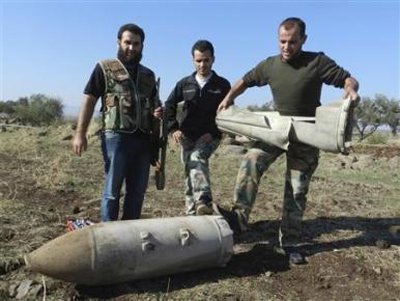 PHUKET: Turkey will imminently lodge an official request with NATO asking the military alliance to deploy Patriot missiles along its border with Syria to guard against violence spilling over, a senior Turkish foreign ministry official said yesterday.

If approved, the deployment would represent a further deterioration in relations between Turkey and Syria – once close allies – and see more military hardware poured into a region where tensions are already high.

Britain also appeared to harden its stance on Syria when Foreign Secretary William Hague said he had ordered UK diplomats to talk directly to Syrian rebels. Britain’s previous stance had been to engage only with political representatives of the opposition.

Syria’s war, in which the opposition estimates 38,000 people have been killed, raises the specter of wider Middle East turbulence and poses one of the greatest foreign policy challenges for US President Barack Obama as he starts his second term.

Analysts said Obama had been unable to make bold moves on Syria during the election period because of the risk that doing so would hurt his popularity. Britain and Turkey have joined US calls for President Bashar al-Assad to step down.

Syrian rebels fired mortars at Assad’s palace in Damascus yesterday but missed, an attack underlining the growing boldness of those fighting to end his family’s 42-year rule and the rebel strategy of launching high-profile attacks against symbols of his rule.

A July bomb that killed four of Assad’s top lieutenants was swiftly followed up with an advance into Damascus by rebels but they were then partially beaten back by Assad’s forces.

Damascus residents told Reuters heavy-caliber shells apparently aimed at the palace had hit the nearby residential Mezze 86 district that is home to members of Assad’s Alawite sect. State-run media said at least three people had been killed and seven wounded in what it described as a terrorist attack.

The violence has highlighted the sectarian dimension of a civil war that is deepening the rift between Sunni and Shi’ite Muslims in the region – Assad’s Alawite sect is an offshoot of Shi’ite Islam.

Allegations of Syrian soldiers looting foreign aid surfaced after a medical aid group said troops had been seizing the supplies and reselling them or channeling them towards government loyalists, putting millions of lives at risk.

“When the regime attacks one of our medical facilities, whether it’s a hospital or something else, they load up everything they can carry, and they burn the rest,” said Tawfik Chamaa, a Geneva-based doctor and spokesman for the Union of Syrian Medical Relief Organizations (UOSSM).

Direct contact with rebels
“(The armed opposition) are playing an increasingly influential role within Syria as the conflict worsens,” Hague said in a statement.

“I have therefore now authorized my officials to have direct contact with an even wider range of representatives including military figures in the armed opposition.”

He said Britain would continue to only supply non-lethal support to the unarmed opposition, in compliance with a European Union arms embargo and British export licensing laws.

British officials would stress the importance of human rights and the rejection of “extremism and terrorism”, and contact with the rebels would be limited to political dialogue, he said.

On a visit to a Jordanian refugee camp, British Prime Minister David Cameron said that efforts to halt the bloodshed so far had been fruitless.

“I am standing with the Syrian border just behind me and every night 500 refugees are fleeing the most appalling persecution and bloodshed to come to safety and frankly what we have done so far is not working,” he said in Zaatari, a camp housing about 30,000 Syrian refugees in northern Jordan.

International and regional rivalries have complicated efforts to mediate a resolution to the conflict – Russia and China have vetoed three U.N. Security Council resolutions that would have put Assad under pressure.

The conflict has also started to suck in neighboring countries. Turkey has been responding in kind to mortar shells hitting its territory as a result of fighting between Syrian rebels and Syrian government forces.

A senior Turkish foreign ministry official told Reuters on Wednesday that the government would make an “imminent” request to NATO to protect its 910-km (560-mile) border with Syria with Patriot surface-to-air missiles.

The official said there was a potential missile threat to Turkey from Syria and Turkey had a right to take steps to counter such a threat. He gave no further details.

The United States and other Western powers say a resolution to the conflict has also been frustrated by divisions and in-fighting between Syrian opposition groups.

Syrian opposition groups will meet on Thursday to form a new 50-member civilian group that will later choose a temporary government for Syria and coordinate with the revolt’s military wing.

Palestinian infighting
Highlighting how Palestinian refugees have been drawn into the conflict, rebels killed 10 members of the Popular Front for the Liberation of Palestine-General Command (PFLP-GC), which is loyal to Assad, in fighting near the Palestinian camp of Yarmouk in Damascus, opposition sources said.

Syrian rebels and pro-opposition Palestinians announced the formation of a new brigade last week to battle the PFLP-GC.

The Syrian foreign ministry said Syria would stand “with full determination against any attempt to drag the Palestinians into what is happening in Syria”, the state news agency SANA reported, quoting a ministry official.

Air strikes and artillery barrages unleashed by the Syrian military in the last few weeks have wrecked whole districts of the capital, as well as parts of towns and cities elsewhere.

Yet, for all their firepower, Assad’s forces seem no closer to crushing their lightly armed opponents, who in turn have so far proved unable to topple the Syrian leader.

The Syrian Observatory for Human Rights, a UK-based opposition watchdog, says it had the names of at least 38,000 people confirmed dead by friends and family. The death toll is going up every day, with a thousand or more killed in some weeks.

World News: Formal warning to Tehran for attack on drone

Breaking News: Myanmar drug smugglers sentenced to death for murder of Chinese on the Mekong