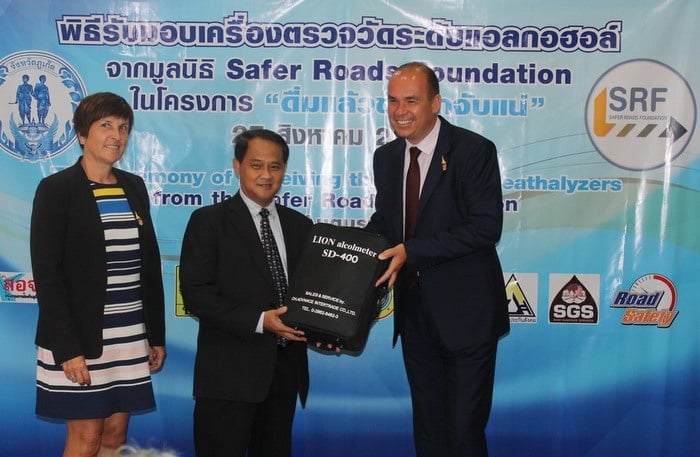 PHUKET: In an effort to reduce drunk driving and the road fatalities linked to it, 39 breathalyzers were donated to Phuket last week.

“Hopefully, officers having these devices with them while they are on duty will help decrease the number of alcohol related road accidents on the island. Nobody wants to see someone injured or killed,” Governor Nisit said.

Phuket Province is seventh in the nation for the most road accidents and is one of the top crash-prone provinces in the South, explained Wiwat Seetamanotch, vice president of the Road Safety Network Group, under the Thai Health Promotion Foundation.

“In Phuket, 30.63 per cent of road accidents are the result of drunk driving. Part of this problem is that officers working at checkpoints don’t have enough breathalyzers,” said Dr Wiwat. “The SRF has been pushing hard to take measures to prevent road accidents in the United Kingdom and 31 countries throughout the world, including Thailand.”

Mr Woodford, who credited his wife for establishing the foundation, said that he was confident that the breathalyzers would help Phuket police and prevent road accidents on the island.