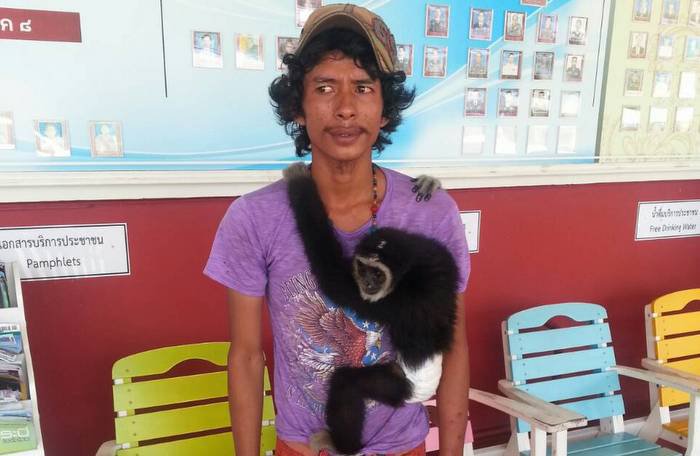 PHUKET: Quick action by officers after receiving a tip-off from a Phuket Gazette reader saw a gibbon tout photographed working on the sands of Monkey Beach put behind bars last week (story here).

Anan Nadee, 20, was arrested along with Bancha Songkhai, 24, in front of the Andaman Resort on Phi Phi Don while using ther illegally owned gibbons as props for tourists to take photographs with, confirmed Suwat Suksiri, chief of the Thung Talay Non Hunting Zone.

With the possibility of making more than 500,000 baht a month during the high-season, the maximum punishment of not more than 4,000 baht, four years imprisonment or both is hardly a deterrent, noted Mr Suwat.

“It is a very low fine. Moreover, when the case goes to court, it is sometimes reduced to 1,500 baht and a suspended two-year sentence,” Mr Suwat said.

The two gibbons in the men’s possession were taken to the Phang Nga Wildlife Nursery Station.

“We aim to get rid of gibbon touts on Phi Phi Island and we will not stop looking for them. We really appreciate all of the help from citizens and encourage them to keep sending us information.”

Mr Suwat believes that there are still more than 20 gibbons on Phi Phi Island that need to be rescued.

Gibbons are generally brought over from Phuket. These baby gibbons, costing about 25,000 baht each, are sourced from the wild by poachers who take them from their mother. The mother is killed in the process, Mr Suwat said.

“I’m not sure if it is easy for the touts to hide from the police or if the police tend to ignore the problem. However, for foreigners, touts represent serious animal rights issues,” Mr Suwat said.

In March, former Miss Universe Natalie Glebova caused a social media storm after she posted on Instagram a photograph of herself posing with a gibbon in Ton Sai (story here). She later led a public awareness campaign to educate people about the issues of touts’ illegal ownership of protected species (story here).

Thung Talay Non Hunting Zone officials are urging police and other relevant officials to strengthen policies and to enforce stricter penalties for those caught in possession of protected wild animal.