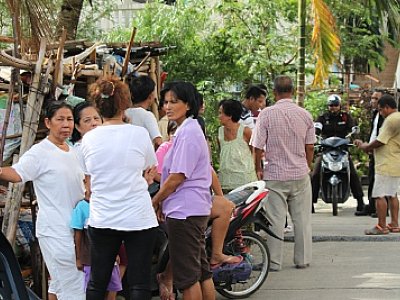 PHUKET: Police are looking for two men wanted for the shooting of a 55-year-old woman in the head at her home near the See Kor Market in Thung Thong, Phuket, this afternoon.

Witnesses told the Phuket Gazette that the two men were seen parking a bronze-silver pickup in front of the home of Sumittra Namfak in Soi Rakchart-Uthit.

The men entered the home of Ms Sumittra, who works there as a seamstress, before neighbors heard a gunshot at about 3pm.

The men fled the scene while shocked relatives, who were inside the home at the time, rendered assistance.

Ms Sumittra was rushed by ambulance to Vachira Phuket Hospital in Phuket Town.

Police have yet to announce any possible motive for the shooting.

Ms Sumittra’s neighbors told the Gazette that she has a foreign “boyfriend”, who is currently abroad.

Correction: The initial report stated the Ms Sumittra was shot at the See Kor Market. The error is regretted.