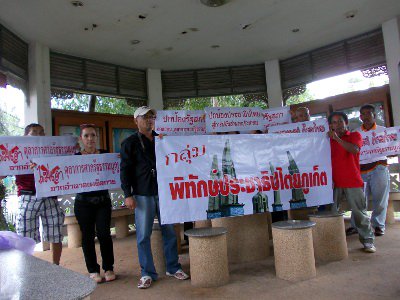 Coinciding with the red-shirt protests in front of Parliament in Bangkok that began on Thursday, and concluded yesterday, the Phuket contingent filed a letter of complaint to Phuket Vice Governor Sommai Prijasilpa.

“Phuket red shirts disagree with this decision since we think it is against the law, so we have gathered together to show that we oppose it, which is our democratic right,” said protest leader Surin Yotharak.

Joining him were protesters calling themselves the “Phuket Group for Protecting Democracy”. They held signs saying, “Nonsense! Interference is the Constitution Court.”

The complaint accused the Constitution Court of abuse of power in ordering Parliament to stop the third reading of the bills, which the opposition Democrat Party and yellow-shirt supporters claim will pave the way for fugitive former prime minister Thaksin Shinawatra to return to Thailand a free man.

The Democrats filed a complaint against the reading of the bills, claiming that the provisions the ruling Pheu Thai Party are trying to introduce would in effect repeal the entire Constitution. The party is led by Thaksin’s sister, Prime Minister Yingluck Shinawatra.

The provisions would be tantamount to overthrowing the democratic form of government with the King as Head of State and acquiring administrative power unconstitutionally through methods not legislated in the Constitution, the Democrats allege.

The complaint filed by the Democrats also asked the Constitution Court, if it saw fit, to instigate criminal proceedings against key figures, including politicians, for attempting to introduce such changes.

Mr Surin called for people to support the red-shirt cause.

“I urge people who love democracy to help us have this panel of judges removed from the Constitution Court. Our group will campaign to encourage people to exercise their democratic rights,” he said.

“We also would like to invite other Phuket red-shirt supporters to join our group’s activities in the future,” said Mr Surin.

Heated debate broke out in Parliament yesterday following Parliament President Somsak Kiartsuranont, who is a Pheu Thai Party member, being attacked by his own party’s MPs after vowing he would definitely not allow voting on the third reading of the charter amendment bill.

For a full report of yesterday’s events in Parliament, see story of Phuket Gazette media partner The Nation (click here).