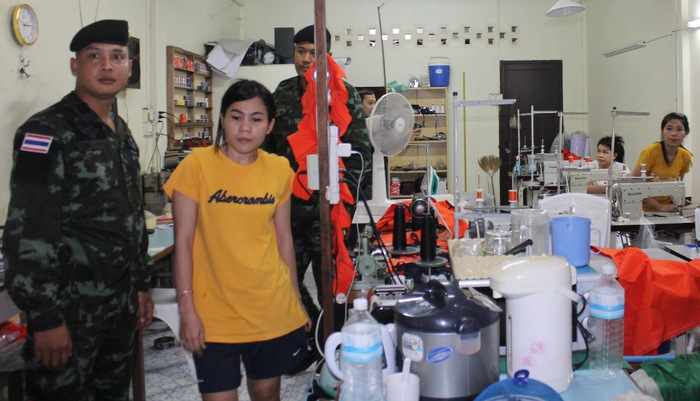 PHUKET: Officers accompanied by armed soldiers today descended on a clothing store in the heart of Phuket Town to safely recover two Cambodians who were trafficked to Phuket to work for 90 baht a day.

The Cambodians, a husband and wife, were taken to Phuket Provincial Hall, along with three other Cambodian women found working in the shop Lai Sua on Montri Road.

Soldiers were tipped off about the situation by a Cambodian relative of the wife.

The Phuket Gazette understands that all five were trafficked from Cambodia to work at the store, which emblazons logos on polo shirts and performs bespoke emblazoning of insignias of Thai government officials uniforms.

The husband and wife told officers that they could not afford to pay 2,500 baht each for the human trafficker to smuggle them into Thailand to work in Phuket, so the shop owner allegedly paid the fee for them.

The couple, then working in Phuket Town for only 90 baht a day, were trapped, unable to repay the trafficking fee to buy their freedom.

Officers are questioning the five Cambodians for more details about how they arrived in Phuket and how they were silenced from telling the Phuket authorities of their predicament.