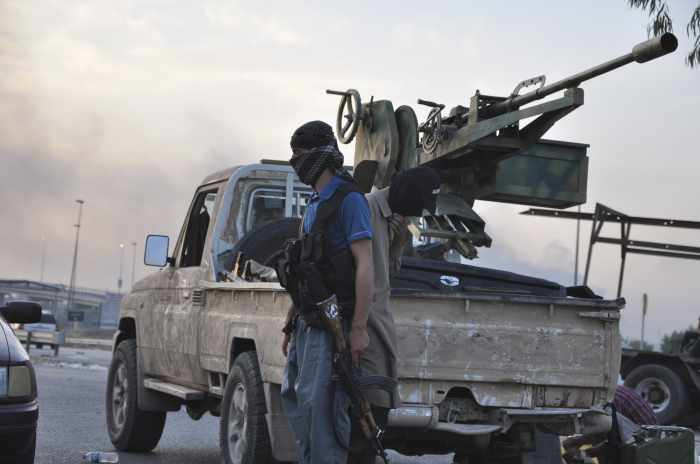 PHUKET: Four gun-wielding rebel fighters sit relaxing on a wall, their faces concealed by scarves and ski masks. All are Indonesians who came to Syria to join the Islamist insurgency, the cameraman says, speaking Indonesian peppered with Arabic phrases.

He pans around and introduces them as a former soldier, a businessman, and a college student, before settling on a boy in his early teens leaning on his AK-47 assault rifle.

“Brothers in Indonesia, don’t be afraid, because fear is a temptation from Satan,” says one of the fighters in the YouTube video, which has since been removed from the Islamist website.

As Sunni Islamist rebels surge from Syria into Iraq, security officials in Southeast Asia and Australia worry the conflict is radicalising a new generation of militants, who are being influenced to an unprecedented degree by social media.

In the 1990s, several hundred Indonesian, Malaysian and Philippine Muslims trained with al Qaeda in Afghanistan and brought their skills and ideology home, inspiring attacks such as the 2002 Bali nightclub bombing that killed 202 people.

At least 30 Malaysians and 56 Indonesians are estimated by security officials to have gone to fight in Syria, although security analysts say the true number is likely higher.

Australia’s government estimates around 150 Australians have gone to the Middle East to join the fighting in Syria and Iraq, with some taking leadership roles.

Many, including those in the video, are believed to have joined the Islamic State of Iraq and the Levant (ISIL), also known as ISIS, whose hard-line Islamist rebels have led a Sunni Muslim charge across western and northern Iraq, including the capture of border crossings and the key city of Mosul.

“Some Malaysians who may have been in contact with some of these people get motivated to participate. We have been arresting a lot of militants within the country.”

Malaysian police have arrested at least 16 suspected militants since April who they said were believed to have ties to ISIL and some of whom trained in jungle areas in northern Malaysia. Malaysian media, citing an ISIL website, reported that a Malaysian named Ahmad Tarmimi carried out a suicide bombing in Iraq in May, although Reuters was unable to verify the incident.

Malaysia is investigating a report by Syria’s permanent representative to the United Nations that 15 Malaysians fighting for ISIL had been killed, its Foreign Ministry said on Tuesday.

Australian Foreign Minister Julie Bishop said this week she had cancelled a “substantial number” of passports on security grounds in recent months and was considering further measures.

“There is a real danger that these extremists will come back home as trained terrorists and pose a threat to our security,” Bishop told the Australian parliament on Monday.

Saudi Arabia, Tunisia, Morocco and Russia are by far the largest contributors of the estimated 11,000 foreign fighters in Syria, according to strategic security firm The Soufan Group.

Official estimates of 236 militants from Australia, Malaysia and Indonesia would account for nearly 9 percent of the foreign fighters from countries excluding those four.

Indonesia, the world’s most populous Muslim country, has long been the epicentre of Islamist militancy in east Asia, breeding groups such as Jemaah Islamiah (JI) that carried out the 2002 Bali bombing and other attacks on Western targets.

The Jakarta-based Institute for Policy Analysis of Conflict (IPAC) said in a report in January the Syrian crisis had inspired Indonesian extremists to an unprecedented extent, partly due to teachings that “the final battle” would take place in the greater Syrian region.

“We can see that ISIS is getting better, it’s growing and it’s widening its reach and influence over cities in Iraq – Mosul, Tikrit and then Ramadi. Soon, God willing, even Baghdad will fall,” said M. Fachry, the chief editor of al-mustaqbal.net, an Indonesian militant website.

Abu Bakar Bashir, the spiritual father of JI who has since split with the group, and Aman Abdurrahman, an influential extremist scholar, have urged their followers to support ISIL in recent months. Several pro-ISIL rallies have drawn large crowds in Indonesia, where support and recruitment for foreign militant groups remains legal.

The concern among security officials is that fighters in Syria and Iraq could breathe new life into the radical movement in Indonesia, where militant groups have been dispersed and weakened in recent years by security crackdowns.

“That’s why we’re focussing on it. Because it will be a massive problem when they come back to Indonesia, everyone agrees on that,” said an Indonesian security official, who is briefed on anti-terrorism efforts but declined to be identified.

Unlike in the 1990s, social media now plays an influential role, with Facebook, YouTube and Twitter widely used by militants to transmit their message and lionise “martyrs”.

“It’s the development of social media that has caused ISIS’s popularity to rise. ISIS has been using social media, especially Twitter, to massively increase their growth,” said al-mustaqbal.net’s M. Fachry.

Mohd Lotfi Ariffin, a Malaysian who says he is fighting in Syria, regularly posts pictures and videos of himself and other militants to his nearly 19,000 Facebook followers.

One of those followers, 21-year-old Malaysian Mohammad Fadhlan Shahidi, was inspired to join him in Syria, according to a video posted on his Facebook page on May 15 showing him side-by-side with Lotfi and another Malaysian fighter.

“At the beginning, I got in touch with Ustaz (teacher) Lutfi,” Fadhlan says. “The Ustaz told me how much I would need for the trip.”

Police in Malaysia and Indonesia face a struggle to keep track of militant activity and secure convictions, analysts say, because of the threat’s more diffuse nature and due to political changes in both countries that have undermined their reach.

The governments of both countries have been accused of sometimes fanning Islamist extremism for political gain. Malaysian Prime Minister Najib Razak was reported as telling members of his ruling party on Monday that they should be inspired by ISIL’s bravery and against-the-odds victories.

Indonesia’s security establishment no longer has the tight control over society that prevailed under late President Suharto up to the 1990s, said Yohanes Sulaiman, a lecturer at the Indonesian National Defence University.

“The problem we have is the chain of command of the government. The military is no longer the all-powerful entity it was when it was able to get the names of everybody,” he said.

Malaysian officials say they have been hobbled by the government’s repeal in 2012 of the Internal Security Act, which allowed indefinite detention of suspects.

“The police especially think we are powerless to handle it like we did it before,” said Malaysia’s Wan Junaidi.