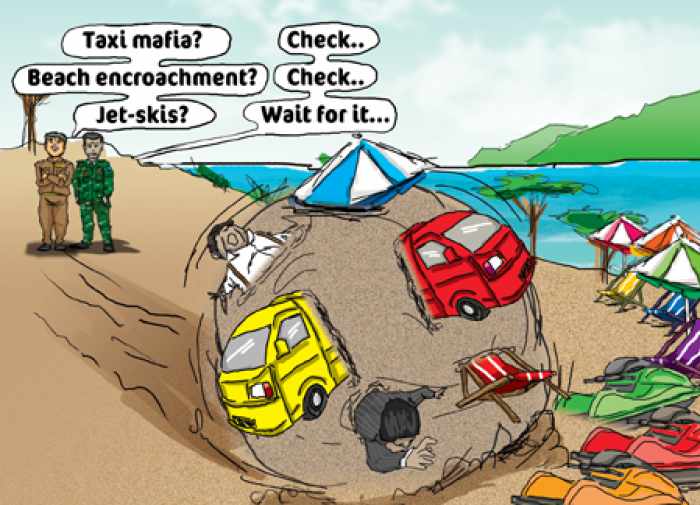 PHUKET: As the rains of the southwest monsoon fall and low-season tourism arrival figures plummet, there could not be a better time for the National Council for Peace and Order to be carrying out the long-overdue crackdown on the many illegal businesses that have tarnished the island’s reputation for too many years.

The removal of illegal taxi stands along the west coast was a great place to start, setting the proper tone by attacking the corruption problem at its taproot. The subsequent removal of encroaching businesses from some beaches in the north has provided the best visual evidence yet of what can be accomplished in a short time through enforcement of existing law.

We hope that all of the island’s beaches can eventually be rid of such blight and returned to something resembling their natural state. This is badly needed, not only as a means of making the island’s tourism industry more sustainable and preserving the island’s natural heritage for future generations, but also to reduce crime by inspiring greater respect for the rule of law.

We wish the authorities the best of luck in serving arrest warrants against the “untouchables” of Patong who have used that once-beautiful seaside town to establish their personal fiefdoms, and amassed with impunity vast personal fortunes at the expense of the natural environment and Phuket’s reputation abroad.

At the time of writing, the exact nature and scale of the impending operation remains unknown, but in order for it to be effective, it will have to target those at the very top of the illegal rackets that have been operating in the party town for decades.

We certainly hope that those under investigation include the shadowy figures who have allowed jet-ski rental operators to continue to intimidate and extort money from tourists despite the partially successful imposition of a compulsory insurance scheme on the industry several years ago.

After the transport syndicates, the jet-ski rental outfits have consistently been one of the leading sources of complaints from foreign tourists. The fact is well known to every provincial governor who has served here in the past two decades. Additionally, it was raised at almost every meeting of the honorary consuls, who repeatedly heard tales from their nationals not only of extortion, but of even more violent crimes – including kidnapping.

In our popular online polls over the years, banning jet-skis altogether has been the favored choice of our readers. In addition to frightening swimmers, they have been the cause of numerous injuries and deaths over the years, are a constant source of noise and air pollution. That they also add to rush-hour traffic misery every evening when the machines are towed back home, is well known to anyone who has ever been trapped behind them.

Enforcement of a single law that has been disregarded by operators for years could put them out of business overnight: jet-ski operators are required to have a Thai captain’s license.

Ensuring that this requirement is met could help bring another beautiful new dawn for Phuket.

Changes in Phuket: Make them last