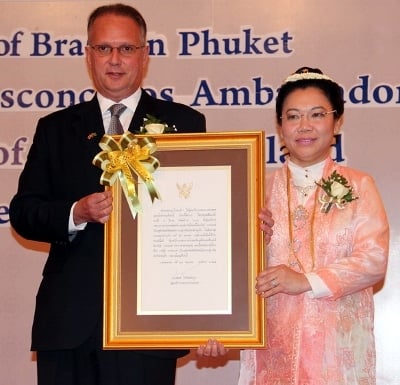 At the Kata Beach Resort and Spa on Thursday, Ambassador Meira de Vasconcellos was joined by Phuket Governor Maitri Inthusut, Phuket Senator Thanyarat Achariyachai and host of other Phuket dignitaries.

“I am very appreciative of the positive relations between Thailand and Brazil and I hope that the Honorary Consul for Brazil in Phuket will keep promoting stronger, friendly relations between the two countries,” Governor Maitri said.

Senator Thanyarat, who is also the Chairperson of the Senate Standing Committee for Tourism, voiced her support for the move.

“Having an Honorary Consulate for Brazil in Phuket will help promote good diplomatic and trading relations and is a welcome move considering the growing number of Brazilian tourists in Phuket, Phang Nga and Krabi,” Ms Thanyarat told the Phuket Gazette.

Ms Jiratha accepted the position with the simple words, “It is my honor to be chosen and to have the opportunity to work in this position.”

After her installation, Ms Jiratha explained to the Gazette that the Brazilian embassy in Bangkok approached her husband, Eam Thavornwongwong, for the position first. Mr Eam is the director of the Kata Group of hotels and the former president of the Phuket office of the Sports Association of Thailand.

“Previously, the ambassador wanted my husband to be the Honorary Consul of Brazil in Phuket since he is interested in football, which is the most popular sport in Brazil.

“However, he declined and explained to them that I actually know more about football than he does, and that I am a big supporter of footballing activities,” Ms Jiratha said.

“As the Honorary Consul for Brazil in Phuket, I will do my best to help assist and protect Brazilian citizens living in Phuket, Phang Nga and Krabi and maintain the diplomatic and friendly relations between these three Andaman provinces and Brazil,” Ms Jiratha added.