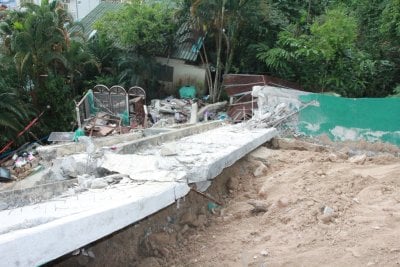 PHUKET: Phuket Governor Maitri Inthusut has vowed to set up a task force to inspect building sites on hill slopes across the island in order to prevent any further incidents like the wall collapse that endangered the lives of a mother and child this week.

Atchara Jutisen, 28, and her 3-month-old baby boy Attawat “Big” Chottantikul last Sunday escaped injury when a four-meter-high concrete retaining wall crashed through the roof of their home, located at the bottom of a slope below The Senses Resort and Spa under construction on Soi Nanai 1 in Patong.

After inspecting the site on Monday, Gov Maitri said, “I am ordering the officers involved to investigate this case in order to prevent similar incidents in the future. Not just here but across the entire province.”

He also called on officials to instigate what he called “strict protective measures”.

“Local authorities must be more careful before issuing building permits. In addition to scrutinizing building plans, the site must be surveyed to see if the ground is adequately compact and stable to support the weight of the structure,” Gov Maitri said.

“The wall [that collapsed] was built on sandy soil, meaning that the adhesive force between the structure and the ground was too weak to maintain integrity,” he explained.

“The authority to construct a building or other structure should be issued according to the law. If an officer considers that the construction does not meet those standards, they should not sign the building permit,” he added.

Gov Maitri was clear that corruption should not play any part in issuing such permits.

“Government officers in every department need to have ‘clean hands’. Do not take bribes or engage in corruption because if problems occur later, it can plainly affect other residents,” he warned.

After inspecting the damage to the homes in Soi Nanai 1, Governor Maitri said that those responsible for the hotel had already cleared the area and were preparing to build new houses for those residents displaced by the wall collapse.

Regarding government financial assistance, the Governor said, “As the incident was not a natural disaster and did not affect a wide area, it cannot be classified as a ‘disaster zone’. Therefore, compensation would be limited to those in dire need, and even then it would not reach to the full amount payable for a natural disaster.”

Lt Col Pratuang Polmana of the Patong Police said his officers were now looking into why the four-meter wall collapsed.

“Police will contact the hotel owner to ensure responsibility for the damage [to the houses] is recognized. At this stage, the damage is estimated to be about 300,000 baht,” Col Pratuang said.

“We will also contact the relevant departments to ask that they investigate construction being done at the site,” he added.

The Gazette notes that the resort operators have responded quickly to the situation. Ms Atchara’s damaged home has been demolished and work is already underway on building her a new home at the same location.