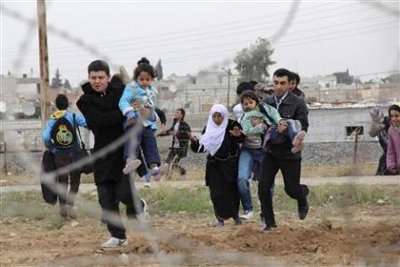 Thousands flee Syria in exodus, millions more in need of aid
Reuters / Phuket Gazette
PHUKET: Thousands of Syrians fled their country yesterday in one of the biggest refugee exoduses of the 20-month civil war after rebels seized a border town, and the United Nations warned that millions more still in Syria will need help as winter sets in.

In Qatar, the main opposition group outside Syria elected a new leader. However, it will start talks today with other factions, including representatives of rebels fighting President Bashar al-Assad’s forces, on forming a wider body that hopes to gain international recognition as a government-in-waiting.

The U.N. said 11,000 refugees had fled in 24 hours, mostly to Turkey. The influx caused alarm in Ankara, which is worried about its ability to cope with such large numbers and has pushed hard, so far without success, for a buffer zone to be set up inside Syria where refugees could be housed.

Rebels overran the frontier town of Ras al-Ain late on Thursday, continuing a drive that has already seen them push Assad’s troops from much of the north and seize several crossing points, a rebel commander and opposition sources said.

“The crossing is important because it opens another line to Turkey, where we can send the wounded and get supplies,” said Khaled al-Walid, a commander in the Raqqa rebel division.

The Syrian Observatory for Human Rights, a UK-based group that compiles opposition activist reports, said at least 20 members of the Syrian security forces were killed when rebel fighters attacked a security headquarters in Ras al-Ain.

Thousands of residents poured out of the Arab and Kurd town, in the north-eastern oil-producing province of Hasaka, 600 km (375 miles) from Damascus.

The Syrian National Council, the main opposition body outside the country, elected veteran activist George Sabra as its new head in Doha on Friday.

Sabra, a Christian, takes over a body that is under heavy criticism from international allies for being ineffective in the fight against Assad and for being driven by personal disputes.

Sabra appealed for arms to fight Assad’s forces. “We need only one thing to support our right to survive and to protect ourselves: we need weapons, we need weapons,” he told reporters.

Qatar, the United States and other powers are pressing the fractious Syrian opposition groups to come together and the SNC has agreed to open unity talks, although it fears its influence will be diluted in any new body.

Western countries and Syria’s neighbours fear that hardline Islamist groups close to al Qaeda are growing in influence among rebels on the ground in Syria.

An outline agreement could see the SNC and other opposition figures agree on a 60-member political assembly, mirroring the Transitional National Council in Libya, which united opposition to Muammar Gaddafi last year and took power when he fell.

In Geneva, a senior U.N. official highlighted the plight of Syrians still in the country. An estimated four million people would need humanitarian aid by early next year when the country is in the grip of winter, up from 2.5 million now, said John Ging, director of operations at the U.N. Office for the Coordination of Humanitarian Affairs.

“Every day our humanitarian colleagues on the ground are engaging with people who are ever more desperate, ever more fearful for their lives and for the lives of their families because of this conflict,” Ging told a news conference. “Since this crisis has begun we have not been able to keep pace with the increasing need.”

The latest flight of refugees raised the total recorded by the U.N. to over 408,000 in Turkey, Lebanon, Iraq and North Africa.

Turkey hits out
Turkish Prime Minister Tayyip Erdogan hit out at world powers on the U.N. Security Council over their inaction.

“It is very strange. There are currently atrocities being committed in Syria and these atrocities are being directed by a state leader,” he said. “How far will this go? When will the permanent members of the Security Council take responsibility?”

Turkey has responded in kind to mortar shells hitting its soil from fighting in Syria and is discussing with NATO allies whether to deploy Patriot air defence missiles on the border.

The Turkish state-run Anatolian news agency reported that 26 Syrian military officers had also arrived in Turkey with their families overnight in what it called the biggest mass desertion of senior soldiers from Assad’s forces in months.

Advancing rebels fired mortars at the presidential palace in Damascus this week. Residents in the capital said security was being beefed up there. Assad told Russia Today television on Thursday he would “live and die in Syria”, echoing words of other Arab leaders before they lost power last year.

In the last three months, the mainly Sunni Muslim Arab rebels have captured outposts on the Turkish border, moving towards the north-eastern heartland of Syria’s one million Kurds, many of whom have tried to stay clear of violence.

The Kurdish Council, a coalition of Kurdish parties opposed to Assad, called on rebels to pull their fighters out of Ras al-Ain, saying the clashes and fear of Syrian bombardment had prompted most of its 50,000 residents to flee.

World News: Formal warning to Tehran for attack on drone