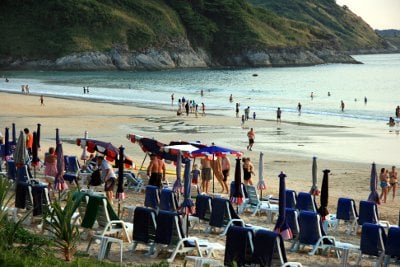 PHUKET: A young boy is on life support in the intensive-care unit (ICU) at Vachira Phuket Hospital in Phuket Town this evening after being pulled from a popular swimming area near Nai Harn Beach late yesterday afternoon.

“His name is Methee Khunsuinhu, 7 years old. He is now in the ICU. He will be transferred to the children’s ward if he recovers,” hospital staff confirmed to the Phuket Gazette today.

Methee came to Phuket with his family who travelled from Songkhla to celebrate the New Year in Phuket.

“The boy was playing in the water near the Nai Harn Lake sluice gate [which forms an estuary that flows across the beach and into the sea] with some other kids at about 4:30pm yesterday when he was rescued,” Samart Chandee, chief lifeguard at beach, told the Phuket Gazette.

“Our lifeguards heard people screaming about 80 meters from where we are stationed on the beach and rushed over.

“I was told that some of the people there seemed to be drunk. Apparently they held out a stick for the boy to grab, but it didn’t work. So a foreign man jumped into the water and pulled the boy out.

“His pulse was low and his face had turned blue when we got to him. Lifeguards administered CPR and he was rushed to hospital in the Phuket Tourist Rescue Center ambulance,” said Mr Samart.

The water from which Methee was rescued is not very deep, he said. “It was only about chest height for an adult, but that is too deep for children, especially when they are left playing unsupervised,” Mr Samart said.

However, he added, “I am not going to deny responsibility for this accident. This is part of the area we patrol. One of our lifeguards had walked past that area just five minutes earlier.”

“Each patrol takes about 10 minutes, and when one lifeguard returns to the lifeguard tent, the other starts walking the patrol again,” he said.

“However, our job is not just to rescue people in trouble, but also to warn tourists that this particular area is quite dangerous. That is why lifeguards have to check on that area all the time,” Mr Samart said.

Thankfully, today was incident-free at the beach.

“Today, January 1, a lot of foreigners are having fun by the lake and there are still many children playing in the water.

“What we can do besides keep our eyes on them is to send our lifeguards out to warn and to talk to the parents and relatives at the beach to be responsible and to not let their children play unsupervised,” he added.

Phuket’s ‘Persons of the Year’: A Sailor’s Salute