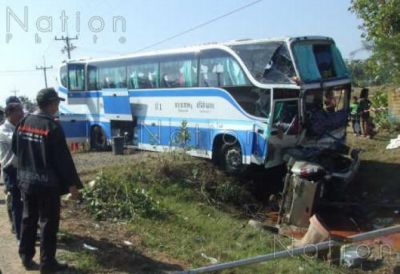 12 killed were enroute to family funeral
Phuket Gazette / The Nation

PHUKET: Police and rescue workers called to the scene of a road accident in Buri Ram province yesterday found a tour bus severely damaged and a pick-up truck in a roadside ditch.

Inside the truck, police found 12 dead bodies and one seriously injured person. A police investigation found that the truck was carrying relatives to assist at a funeral in Buri Ram’s Nong Hong district.

The bus had been carrying 50 people, 14 of whom, including 34-year-old bus driver Somkiat Chutrakul, were injured.

Police were investigating the cause of accident.

Meanwhile, the Road Safety Centre in Bangkok reported that the casualty toll for the first two days of the seven-day New Year’s holiday showed 94 deaths and 1,051 injuries in 955 accidents nationwide.

For the latest statistics under the ‘Seven Days of Danger’ campaign here in Phuket, click here.

Most accidents across the Kingdom involved motorcycles (82 per cent).

Among the main causes were drunk driving at 34 per cent and speeding (21 per cent).

A total of 705,312 vehicles were stopped at 2,459 checkpoints, and 89,715 motorists were found to have broken the traffic law, mostly by not wearing helmets and not carrying driver’s licences.

The 955 cumulative road accidents were fewer than in the same period last year by 57 cases, and injuries down by 44 cases, but deaths were up by 15, Somchai said.

Here in the South, Phuket’s neighboring Trang province had the highest cumulative number of accidents, 37.

Holiday travellers yesterday continued to head out of the capital to the provinces. Bangkok’s Mor Chit Bus Terminal reported that 170,000 travellers had cleared its gates to take 7,317 bus trips on the day.