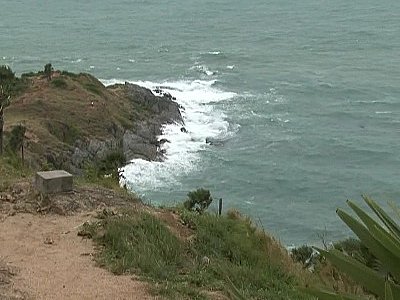 The corpse of Chalad Thongdee, 54, was spotted near a rocky crop off Phuket’s iconic tourist attraction at about 12:45pm.

Mr Chalad, who lived in Phuket Town, had been missing since Saturday night.

He went fishing with friends at Yanui Beach, the next beach north of Laem Phromthep, but a large wave washed him off the rock he was fishing from.

Friends immediately reported the incident to police and an all-night search was launched.

However, although the body was found yesterday afternoon, the rescue team could not recover it as it was dangerously close to rocks, said Chalong Police Duty Officer Lt Attawat Suwannarat.

“We had to wait until it floated far enough from the rocks so we could safely recover it,” he said.

By 5pm, the rescue team asked assistance from a local speedboat operator and returned safely to shore with Mr Chalad’s corpse by 6pm, Lt Attawat explained.

Mr Chalad was well known for his talent in stage decoration and was part of the team that created the stage scenes for the Heroines’ Festival in March at which Phuket Governor Tri Augkaradacha played a part on stage.