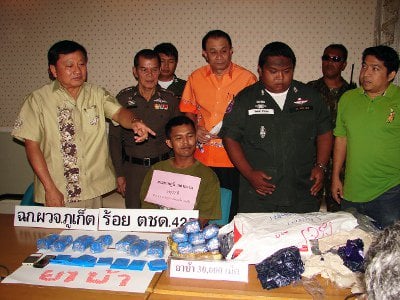 PHUKET: A Phuket hotel worker out on bail from a previous drugs arrest was nabbed this morning with 30,000 ya bah (methamphetamine) pills stuffed into a Thai Post cardboard box, police said.

The capture of 32-year-old Phakphum “Aod” Ply-ngam from Rassada represents by far the largest bust of a ya bah mule in a string of recent arrests.

The estimated street value of the pills is about nine million baht, according to recent police figures.

A special task force set up by Phuket Governor Tri Augkaradacha, acting on tips from an informant, arrested Phakphum at about 8:30am as he was making his way to the bus station on Phang Nga Road in Phuket Town.

Large drug busts in Phuket usually involve mules smuggling contraband onto the island, such as the seizure of six kilograms of cocaine this week at Phuket International Airport.

However, Phakphum was allegedly on his way to send the drugs off the island to the southern province of Trang, police said.

The informant told police that a Phuket drug dealer named “Aod” would be transporting a shipment of the drug out of Phuket Town this morning.

When police arrived at the given location, on Wichit Songkram Road Soi 1 in Phuket Town, they spotted a “suspicious” man carrying a plastic bag.

After asking Phakphum’s permission, police searched his body and the bag, uncovering the massive haul of ya bah.

Phakphum confessed that the drugs were his and that he was on his way to the bus station to send the parcel to Trang.

He told reporters that he was “just a messenger” and that this was the fifth time he had attempted to ship drugs out of Phuket – the others were successful, he said.

Each time he received an order by phone, picked up the drugs at a designated location, packed them in a postal box and sent them to their destination by bus, he said.

This time, he picked up the drugs behind an apartment on Wirat Hongyok Road, he said.

Phakphum has been charged with possession of ya bah with intent to sell, a crime punishable by death.

He was arrested last year on April 7 and charged with possession of 70 ya bah pills with intent to sell and was bailed out last June.

For a look at the Phuket judicial system through the eyes of the new Chief Judge, Prakorn Rattanapit, and his ideas for tackling the over 3,000 backlogged cases in the Provincial Court, pick up a copy of the upcoming Phuket Gazette, due out on news stands on May 20.