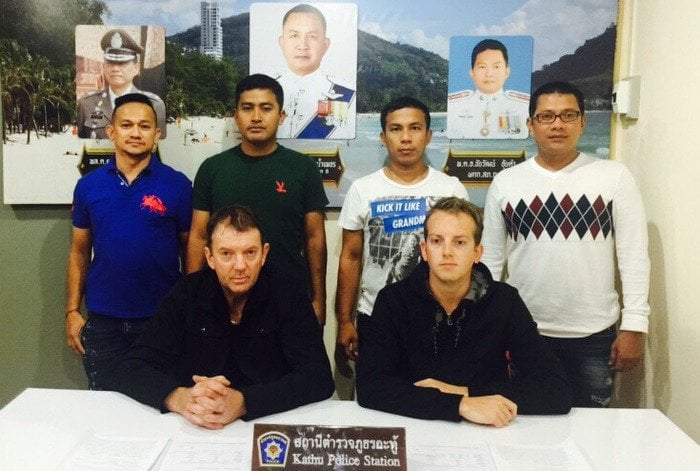 PHUKET: Police scooped up a New Zealander and his son upon arrival at Phuket International Airport last night for a 2-year-old unpaid restaurant bill from the Blue Marine Resort and Spa in Patong.

The Phuket Provincial Court issued an arrest warrant for Brian Russell Finn, 54, and his son Luke Russell Finn, 24, for allegedly ‘dining and dashing’ on a 15,000 baht food and beverage bill in 2013, explained Lt Col Sutthichai Thianpho of the Patong Police

“Immigration flagged the pair on arrival, so it was easy enough for us to come up and serve the arrest warrant,” Lt Col Sutthichai said. “They skipped out on the bill and managed to leave the country before we could take action. Luckily, they returned to Phuket.”

A representative from the Blue Marine Resort and Spa filed a complaint with the Patong Police following the incident on September 5, 2013.

The New Zealand Embassy in Bangkok and the Blue Marine Resort and Spa have both been informed of the arrest, confirmed Lt Col Sutthichai.

“Both sides have made it clear that they would rather negotiate rather than go to court. So a representative from the resort will come to the police station soon, as we only have the right to keep the suspects in custody for 48 hours,” case officer Capt Yingyong Chuoykij of the Patong Police confirmed.