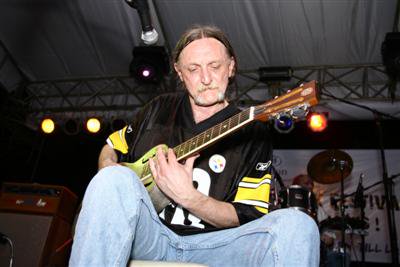 KARON, PHUKET: An electrifying performance in the early hours of Saturday morning from acoustic blues superstar Eric Bibb underlined why he was chosen to headline the 2009 Phuket International Blues Rock Festival.

Taking to the stage at around midnight, the Grammy nominated star dazzled crowds with his smooth, up-tempo brand of blues.

Bibb began his hour-long set individually but was later joined by three other musicians to close the opening night of the festival.

Earlier in the evening the crowd was treated to performances by George Cordeiro and the Fai Jang Blues Gang, the Sam Wilko Band, Corinne Gibbons, The Rich Harper Band and “Chasing Jimi”, featuring Jimmy Fame and the brilliant Rich Harper in a tribute to Jimmy Hendrix.

The performance of one of Phuket’s own, The Groove Doctors, was another highlight. Taking to the stage with almost 10 artists, fronted by Tony “Chainsaw” Wilson, the band produced a thrilling spectacle which included an outstanding version of the Doobie Brothers classic, Long Train Runnin’.

The festival gates will once again be open at 5 pm and tickets are on sale at the door, priced at 800 baht for what promises to be a second night of high-quality live music.

As every year, the Phuket Gazette and PGTV are proud sponsors of the festival.