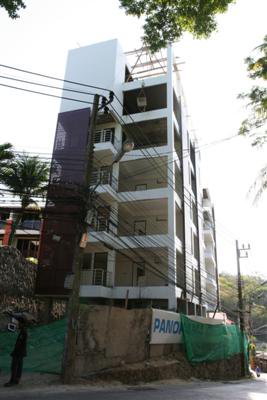 PATONG, PHUKET: Police Region 8 Commander Santarn Chayanon arrived in Phuket yesterday to personally oversee the investigation into the murder of Francis Alex Degioanni, the Canadian man who was shot and killed by two men outside his Panorama Condominium office on February 19.

They discussed the possibility that the killing was the result of a dispute over a joint business venture. Mr Degioanni is understood to have been involved in a court case with a former Thai business partner over the alleged disappearance of 20 million baht.

Police have yet to rule out other possible motives, however.

The seven bullet wounds sustained by Mr Degioanni included both .38 and .327 caliber slugs, it was reported.

Phuket Governor Preecha Ruangjan yesterday said he had ordered an expedited investigation because a quick arrest would help maintain Phuket’s image as a safe tourist destination.

Meanwhile, The Vancouver Sun has reported that Mario Degioanni, the victim’s father, said that Francis “had become increasingly nervous during the phone calls he made to his parents twice a week,” and that last month he had been poisoned and hospitalized.

A local cable television news program in Phuket City last night broadcast extended and graphic footage of Mr Degioanni’s naked body being examined by medical staff at Patong Hospital. One of the slugs had entered his neck near the carotid artery.

The Gazette was unable to confirm reports in a local Thai-language newspaper that police already have a suspect in custody.

That regional police are directly involved in the investigation reflects the high-profile nature of the case, which has drawn more international interest than any of the many killings in Phuket since the stabbing murder of Swedish tourist Hanna Backlund in Mai Khao last March.