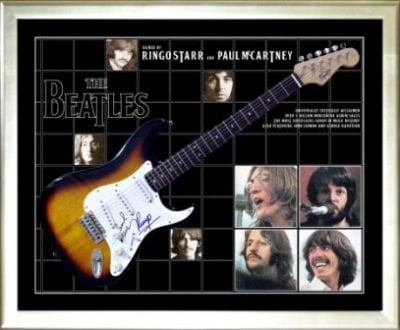 PHUKET: A guitar signed by members of the Beatles is just one of the unique items of entertainment and sporting memorabilia to be auctioned off for charity at next Saturday’s Beach Fun Fest at Surin Beach.

Other autographed items on auction at the much-anticipated fundraising event organized by the Patong Rotary Club include a Pele 1960s Brazil shirt; a US masters flag; a golden Puma running spike signed by the fastest man ever to have lived, Usain ‘Lightning’ Bolt; a Michael Jackson LP and glove and a Billy Joel LP; plus signed and framed Michael Schumacher, Steven Gerrard, Daniel Craig and Al Pacino photographs.

But the auctions are just a small part of what promises to be a mega event of sunset fun for all.

Catch Beach Club will be feeding the masses with a mammoth seafood barbecue, and on the beach-front stage, there’ll be live reggae from band Job 2 Do.

A handful of international DJs will also be taking turns on the decks to keep the beach beat pumping from sunset till late.

All this fun is for a good cause, though. Money raised from the auctions and ticket sales will help local children in need as part of Patong Rotary Club’s Expanded Scholarship Fund.

Tickets are 1,000 baht each and include the seafood buffet and bidding rights in the auctions. Tickets are available at Twinpalms, Sandwich Shoppes, and the Phuket Gazette offices.

The Rotary club’s scholarship fund currently supports more than 250 local children who were directly affected by the 2004 tsunami. That fund is being expanded to include other disadvantaged children and those with special needs in Phuket and in Phang Nga provinces.

The Rotary urges party goers not to drink and drive on the night or arrange to stay with friends in the Surin area. A number of hotels in Surin have offered special rates to Beach Fun Fest goers.

TwinPalms has a ‘Lost weekend’ special offer up for grabs. The 15,000-baht package for two from October 16 to 18 includes accommodation over the three days and two nights, a complimentary barbecue the night before the Rotary Fun Fest, free entry into the beach party and a complimentary Sunday Brunch the next day.

Ayara Hilltops is offering a special 3,500 baht rate for a Courtyard Sea View suite, inclusive of breakfast for two.