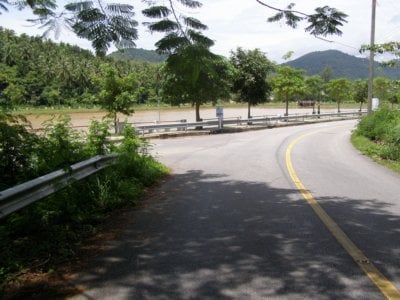 RAWAI, PHUKET: An expat Phuket resident narrowly escaped an attempted rape in the Nai Harn area of Phuket when she was attacked by a Thai man wielding a screwdriver last Friday morning.

The victim, 39, told the Gazette today that the attack came as she was out for a morning jog near Nai Harn Lake at about 8am.

She was running along the uphill section towards Phromthep Cape when a Thai man pulled up along side her on a motorbike and began talking to her in broken English.

“He offered me a ride, but I refused. He also asked if I had a boyfriend, so I said yes,” said the victim, a long-term resident of the area.

According to the victim, the man then circled back and forth a few times, then got off the bike and walked straight towards her, brandishing a screwdriver.

The attacker forced her up a dirt path to a secluded area, where he began to try and rape her, pinning her down and punching her when she tried to scream for help.

When she noticed another Thai man jogging past on the main road, she summoned all her strength and kicked off the would-be rapist.

The other jogger escorted the woman back to the safety of the Nai Harn Lake area and stayed with her until she felt safe.

She then went to report the attack at Chalong Police Station.

Her assailant remains at large.

Chalong Police confirmed that a complaint has been filed and said the woman told them her assailant was a young Thai man, possibly in his teens or early twenties.

The incident has been a popular topic of discussion on the Phuket Gazette/Thaivisa.com community forum.

Beatles memorabilia up for auction at Beach Fun Fest