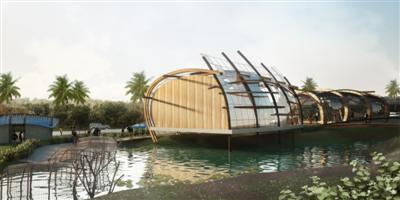 RASSADA, PHUKET: Development of a new cultural center in Phuket to educate visitors about Phuket’s sea gypsy traditions is on hold until more funding can be found to complete the project.

Another two million baht is needed to complete the Urak Lawoi Culture Center, which is being built near the Laem Tukkae sea gypsy village on Koh Sireh in Phuket.

Two million baht in government funding from Phuket provincial authorities has already been pumped into the contemporary museum since plans for the center were announced in September.

The initial budget will only cover the construction of building ‘A’, a venue to stage sea gypsy cultural performances.

Extra funds are needed to develop a visitor’s center.

Once the budget is secured, construction will begin.

Chief Provincial Public Works officer Anukul Saengthongchuy said, “The project began with a budget of two million baht for the construction of building ‘A’.

“The second building, building ‘B’, will display sea gypsy cultural items and house restrooms and other facilities. It will be built after we secure another two million baht.”

Additional funding will likely come from a number of sources, including the Tourism Authority of Thailand, Phuket Provincial Culture Office and local organizations, he added.

Construction will start within a month and is expected to take three months to complete, he said.

The project architech is Able Architects Co Ltd and a contractor is now being sought.

The center should be ready to open within six months, he added.

Beatles memorabilia up for auction at Beach Fun Fest