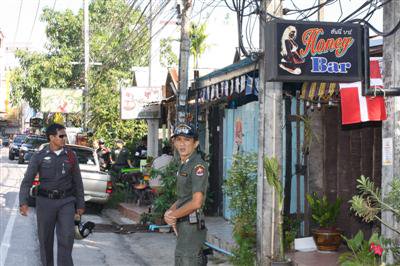 KARON, PHUKET: Patrons of five small bars in Kata will have to find new watering holes, after police and other security forces yesterday forced the owners to vacate their premises and had them torn down by heavy machinery.

The notice ordered the removal of Honey Bar, B Goodbye Bar, Easy Bar, Lovely Bar and Cowboy Coffee bar, located on over one rai of land owned by his clients.

The bars, about 300 meters from Kata Beach, line the road from Kata to Karon, behind the Club Med resort.

The bar owners were not happy and threatened to press charges, but finally gave in and began hastily removing furniture and equipment from their premises. Not long after, a backhoe began tearing down the structures.

Following that ruling, eviction notices were posted on the buildings three times, but to no avail.

Mr Chayapat said the company felt sorry for the Thai and expat owners of the bars, who appeared to have been cheated on rental agreements, but the company nevertheless had to protect its interests and abide by the law.

He estimated the value of the land in question at around 30 million baht.

One of the staff of the Lovely Bar said the bars should have been allowed to continue operating till the end of the high season, as business is brisk this time of year.