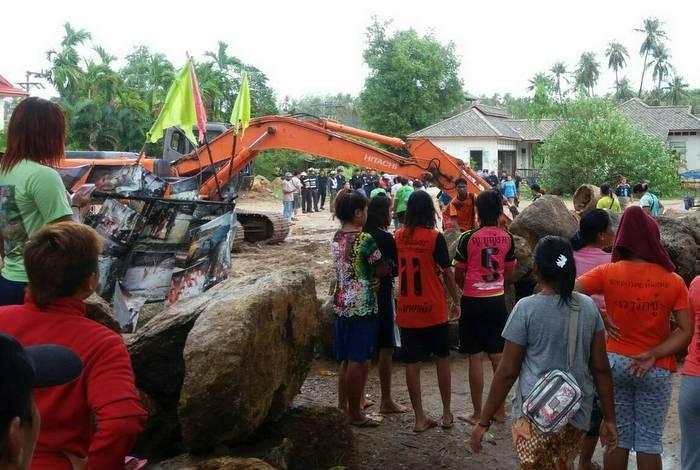 PHUKET: Sea gypsies in Rawai threw stones and insults at builders from Baron World Trade Co yesterday after the construction company made a wall of boulders to block access to the site and began digging on the disputed land.

About 100 sea gypsies gathered to stop construction workers while police and army officers looked on.

The sea gypsies claimed the boulders blocked access to their sacred ceremonial grounds. The villagers reportedly threw stones at the construction workers and then removed the offending boulders.

“About 50 to 60 men came to work on the site,” said one of the elders in the sea gypsy community, Ngeem Damrongkaset.

“We got together to try to stop them from working, but they put up a rock wall to block us. They left not long after the argument, but their backhoe is still there. Fortunately, nobody was injured,” said Mr Ngeem.

In January the sea gypsies submitted a written plea for intervention to Deputy Prime Minister Admiral Narong Pipatanasai following a violent confrontation between residents and the developer in which more than 30 sea gypsies were hurt. (story here).

Additionally, Governor Chamroen told the Phuket Gazette that a team is being set up to measure alternative paths to allow the villagers to access their ceremonial site (story here).

The Rawai sea gypsies recently turned down the provincial government’s offer to purchase 19 rai of the disputed land, insisting that the land deeds be revoked entirely (story here).

Fierce storms cause more than B300,000 worth of damage