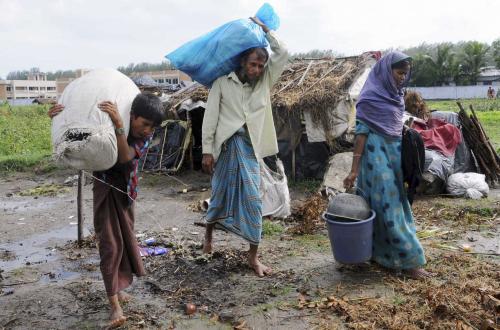 Winds up to 100 kph (60 mph) lashed the coast and whipped up waves, with an expected 2.1 metres (seven feet) storm surge and heavy rain expected to cause widespread flooding.

“It started to cross and is approaching towards Chittagong and Cox’s Bazar coasts,” said a Bangladesh meteorological department official.

The storm first hit Khepupara on Bangladesh’s southern coast and was tracking northeast towards the two ports on the eastern coastline near Myanmar.

Eyewitnesses said low-lying coastal areas were covered in waist-deep water as the storm crossed and trees were uprooted and houses damaged. Two people were reported killed, one crushed by a falling tree and another as he made his way to a shelter.

The storm killed at least seven people and displaced 3,881 in Sri Lanka as it tracked across the Bay of Bengal towards Bangladesh.

A boat carrying Rohingya Muslims in neighbouring Myanmar capsized at around midnight on Monday after hitting rocks off Pauktaw in Rakhine State while evacuating ahead of the storm. Official media said 42 people were rescued, but 58 were missing.

“The government has ordered the evacuation of about one million people from 15 coastal districts,” said the U.N. Office for Coordination of Humanitarian Affairs (OCHA).

“As per the latest storm trajectory, 4.1 million people have been identified as living in at risk areas in the districts of Chittagong and Cox’s Bazar,” it said in its latest update.

The port in Chittagong, which has a population of about three million, and the airport in Cox’s Bazar were closed on Wednesday.

Meteorologists said Mahasen should weaken quickly into a tropical rain depression over land.

“Mudslides will also be a concern as the heavy rain spreads farther north and east on Thursday night and Friday into easternmost India and northern Myanmar,” said meteorologists at Accuweather.com storm forecasters.

Bangladesh has more than 1,400 cyclone-proof buildings on standby, but across its eastern border in Myanmar tens of thousands of people on the coast were sheltering in makeshift camps and huts made of timber and palm fronds.

The Myanmar government had planned to move 38,000 internally displaced people, most of them Rohingya Muslims, by Tuesday but many have refused to relocate from camps in Rakhine State in the west of the country, afraid of the authorities’ intentions.

At least 192 people were killed in June and October last year in violence between ethnic Rakhine Buddhists and Rohingyas, who are denied citizenship by the government in Myanmar and considered by many Buddhists to be immigrants from Bangladesh.

At a camp near the sea on the outskirts of Sittwe, the capital of Rakhine State, several people told Reuters on Wednesday they would rather perish in the storm than evacuate.

“We arrived here last year because of the clashes between Rakhine and Muslims. I lost everything. Both my mother and my two young daughters died,” said Hla Maung, 38, a Muslim. “If the cyclone hits here, I will pray to Allah. Everyone here wants to die in the storm because we lost everything last year.”

Myanmar is a mainly Buddhist country but about 5 percent of its 60 million people are Muslims. They face a growing anti-Muslim campaign led by radical Buddhist monks. A Reuters Special Report found apartheid-like policies were segregating Muslims from Buddhists in Rakhine State.