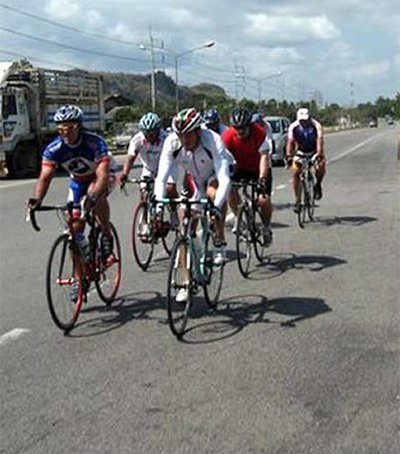 PHUKET: Four days of hard pedaling has taken its toll, but the 2012 Bangers on Bikes Bangkok to Phuket Charity Bike Ride is nearing the final leg while the hardy cyclists are on their last legs with only 140km to go.

On Monday, 11 riders and five support crew left Bangkok on a 916km saddle mission to raise 500,000 baht for the Asia Center Foundation (ACF) in Phuket and the Nak Suu Tigers program in Bangkok.

The group will leave Takuapa tomorrow morning for the stretch home and plan to cross Sarasin Bridge at about 11:30am and on to the ACF in Kathu for a reception at 3.30pm.

Day one’s expedition started at 6am in Samut Sakhon, but things didn’t go as planned with water bottles, a helmet and a map left behind at the start point. Thankfully the support car was able to return and collect the necessary items and the boys raced across the salt flats, building up to 45km/hr as they reached Hua Hin. A quick cappuccino in Starbucks was imbibed to lift the fatigue before they pushed the last 44km into Dolphin Bay and the end of their 188km first day trek with no injury concerns, thankfully.

Day two saw the group leave Sam Roi Yod and head for Pak Khlong, a journey of 185km. A scenic start took them through a national park, but looks of admiration for the views soon turned into grimaces with hills en route knocking the wind from their sails.

Day three or ‘hump day’ was a 206km drill in spirit-breaking temperatures over tough climbs that proved costly in the end. Three riders from China, Andrew Hjelmeland, Gervais Lavoie and Stephen Pennicott hit the wall and had to pile into the support car, while other riders suffered mechanical problems or endured gut-wrenching stomach problems, but still the audacious eight carried on to reach their destination at Tha Chana.

Day four and another rider succumbed to the trial. The Gazette contacted the group and spoke to Richard Folds as they were starting their descent into Takuapa. “We’re down to seven riders now after Martin Hodgson had to withdraw,” said a breathless Richard. “I haven’t been able to sit down on the saddle for most of the past two days. It’s been a real struggle for everyone, but the support has been great and we’re really looking forward to getting into Phuket and seeing everyone at the ACF,” he added.

Yes, you guessed it, the magnificent seven of Jeff Klentz, Bob Pearson, Pete Burgess, Patrick Bernard, Andy Lamont, Trevor Day and Richard Folds will leave Takuapa early in the morning and after a brief pit stop in Thai Muang, they expect to cross Sarasin Bridge by 11am.

Speaking to the Gazette this afternoon, director of the ACF Roelien Muller expressed her appreciation for the cyclists’ efforts. “It is a fantastic effort by the rugby guys and they should get great recognition for all they are doing for charity,” she said.

If you’re in the area and want to meet the guys and offer money for the charities, please drop into the ACF at 3.30pm. Donations of cushions and remedies for chapped skin will also be dearly welcomed by the riders.

For more information on how to donate to the charities visit arkintl.org or asiacenterfoundation.org.