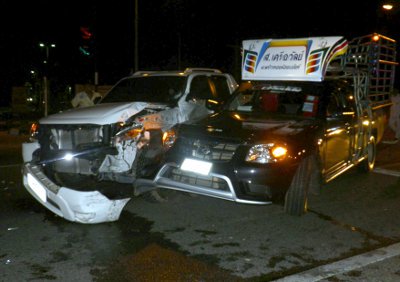 PHUKET: A two-vehicle collision in Thalang last night was likely the result of one pickup braking for a red light, only to be slammed from behind by a second pickup whose driver expected him to run through it, Phuket Police said.

Each of the vehicles had two passengers, none of whom were injured in the crash.

Thalang Police were notified of the accident of Thepkrasattri Road northbound at 12:30am.

At the scene they found a black Mazda pickup crashed into a white Ford Ranger at the junction in front of the Tesco Thalang shopping mall.

Capt Somkhit Khawsan said it appeared that the Mazda braked for a red light, only to be rammed from behind by the Ranger.

The Phuket-registered Ranger, a sports model, suffered the worst of the damage to the heavier Mazda.

The Surat Thani-registered Mazda belonged to the Sor Seri-alai Company, a coconut collection and transport firm that uses monkeys to fetch its products from treetops. No simians or coconuts were aboard at the time of the accident.

Both drivers were escorted to Thalang Police Station and charged with reckless driving, as is customary in Thailand.

Thai Police typically charge both parties involved in road accidents, then drop charges against the innocent party as determined by subsequent investigation.

The Phuket Gazette reminds drivers to always check the rear-view mirror when preparing to brake quickly for a red light.