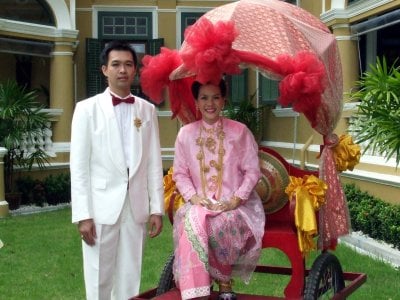 PHUKET: The Tourism Authority of Thailand (TAT) is organizing a mass wedding ceremony in the “Baba Peranakan” (Straits Chinese) tradition to take place in Phuket Town this month.

The colorful event, organized jointly with the Phuket Peranakan Association (PPA) and Phuket City Municipality, will take place August 14 and 15.

It is intended both as a celebration of Peranakan culture and to promote the island as a wedding and honeymoon destination.

TAT Phuket Director Bangornrat Shinaprayoon said both Thai and foreign couples are invited to take part, and the Indian, Korean, Chinese, Japanese, Australian and German markets are being especially targeted.

Wedding and honeymoon tourism is a boon for the local economy because nuptial events generally attract large groups of family and friends, she said.

Wedding planning can be the stuff of nightmares, but those taking part in the Baba Peranakan wedding will have everything arranged for them. A fee of just 39,000 baht will cover wedding attire, accommodations and the service itself.

The event is limited to just 18 couples. Those interested in taking part should visit the PPA office at 61 Satun Road in Phuket Town or call 076-224316 as soon as possible.

The deadline for applications is August 5.

Activities associated with the wedding will include a traditional rickshaw procession along Thalang Road from 8am to 11am on August 15, followed by a meal at the Phuket Country Club in Kathu. Tickets are available at the PPA office for 300 baht.

There will also be a “Nomsod” (morning sweets) cooking demonstration at the Hongyok Mansion on Thepkrasattri Road from 4:30pm to 8pm on August 14. Tickets for that event are available for 200 baht at the PPA office.