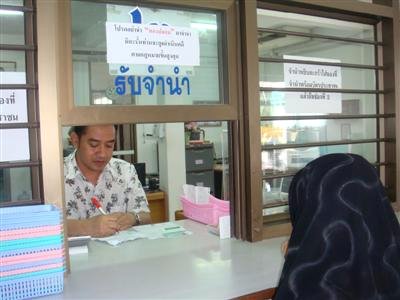 PHUKET: The general state of the economy – not World Cup gambling – is responsible for brisk trade at the Phuket City Municipality Pawnshop, officers say.

The shop, on Kamorapat Road in Phuket Town, currently has 480 million baht out on loan to 31,280 customers, according to a release by the municipality.

Borrowers appear to be pawning more valuable items, as the amount currently out on loan is a 22% increase over the same time last year while the number of customers is up just 4% .

May and June, which mark the start of the new school year, were the months with the largest loans issued: 91 million baht and 89 million baht, respectively.

Given the current trend, Phuket City Municipality will make 90 million baht in loans available for each of the last six months of 2010.

The maximum redemption tickets offered are for 100,000 baht and customers are limited to five each, for a maximum loan amount of half a million baht.

Apiwat Chaiyakul, manager of the Phuket City Pawnshop, said that the bad economy – not gambling during the World Cup – had forced people to borrow. The service is popular among both rich and poor people who face liquidity problems, he said.

Gold ornaments comprise 98% of all the pawned assets, with small numbers of mechanical tools and electrical appliances also accepted as collateral.

Phuket City Municipality Mayor Somjai Suwansupapana said the pawnshop continues to operate debt-free because of the ease with which unredeemed gold items can be sold.