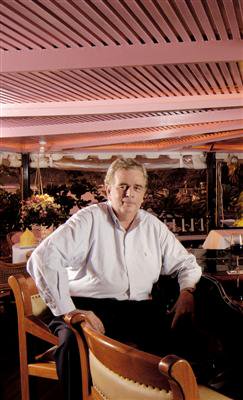 “On behalf of Thomas McNamara’s wife, Khun Pensri and children Casey, Fleur and Pure, it is with great sadness I must inform you that Tom, a long term resident of Phuket and founder of the Baan Rim Pa Group of restaurants, has lost his long battle with prostate cancer. Tom passed away at Bumrungrad Hospital late on Sunday evening, November 23.

“His family would like to express their gratitude to those who assisted in blood donations two weeks ago. The support was amazing.”

Baan Rim Pa’s Executive Assistant Manager Sue Ultmann told the Gazette that Mr McNamara’s family will hold private funeral services, but that Tom’s many friends on the island will be invited to attend his cremation at Wat Chalong.

The ceremony will likely take place next weekend, after all of Tom’s family have arrived from abroad.

Rather than buying flowers, friends are asked to donate to the Phuket Has Been Good To Us Foundation that Tom founded after the tsunami.

Tom was passionate about the foundation, which he set up to give back something to the local community and its next generation by improving educational opportunities at local schools, especially the Kalim School.

Tom McNamara was originally from the US state of Rhode Island. He moved to Phuket in 1988 and opened Baan Rim Pa two years later.

He was an icon in Phuket, not only among the local expatriate community, but also for the many thousands of repeat visitors to his restaurants year after year.

The Gazette joins these people and his family in mourning his death.