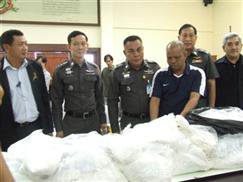 The PSE, stored in a number of thick plastic bags, was found stuffed into the bases of bronze statues that were prepared for export to Australia

The exact time and date of the arrest was not disclosed.

Police said that an Australian suspect in the case, identified as David Yusef, managed to flee Thailand before the raid and is still at large.

The arrest comes after a two-month investigation by the AFP following the arrest by the Australian Customs Service of a Lebanon-born Australian national in Sydney. He had been caught with 1,500 kilograms of pseudoephedrine.

Subsequent investigation revealed that more than half of it, 850 kilograms, had been sent to Australia from Phuket.

Representing the AFP at the press conference was Michael McKay, who said that PSE is found in many over-the-counter nasal decongestants. However, it is also a key ingredient in the manufacture of both ya bah (methamphetamine) and ya Ice (crystal methamphetamine).

For this reason, Australian law is very tough on those found in illegal possession of pure PSE, with jail terms of up to 25 years and/or fines of up to $A550,000 (approx 11.8 million baht).

Also attending the press conference were officials from the Ministry of Public Health, Phuket Provincial Health Office and the Thai Food and Drug Administration.

Officials from these agencies will join police in investigating local pharmacies mentioned by the suspect as having assisted in providing the PSE, according to the press release.