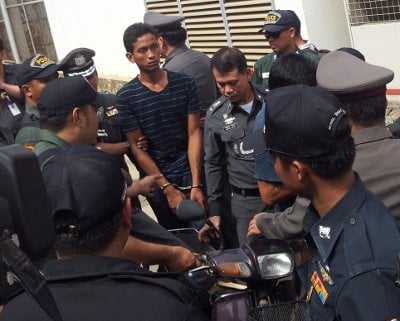 PHUKET: The two men arrested for the brutal stabbing murder of Australian travel agent Michelle Smith were presented to the media during a re-enactment of the crime outside the Katathani Hotel in Phuket this morning.

During a press conference at the resort after the re-enactment, Deputy National Police Chief Pansiri Prapawat told some 50 media personnel that the pair confessed to the crime, but said they had no intention of killing Mrs Smith.

Mrs Smith, a 60-year-old mother of three from the city of Perth, Western Australia, was in Phuket on a “familiarization tour” of the island when she was attacked about 100 meters from the resort.

With a punctured heart and lung, she collapsed and died in the arms of her friend and compatriot Tammee Lee Lynn, who suffered a lacerated right arm in the attack.

The police were told he worked at a cockfighting gambling den somewhere on the island, even though such activity is illegal in the province. He had no prior criminal convictions.

His accomplice Surin Thatthong, the driver of the motorbike used in the attack, is no stranger to prison life. He had four prior theft convictions and has served time in Phuket Provincial Prison. The native of Samut Sakhon moved to the island about five years ago.

Little information was given about how investigators tracked down the two men, nor was there any mention as to whether the 300,000 baht in money on offer for information in the case will be rewarded.

The last time a major reward was offered in a murder case on the island, during the July 2010 manhunt for American Ronald Fanelli, the 50,000 baht reward money was divided up among the police investigators who worked on the successful investigation.