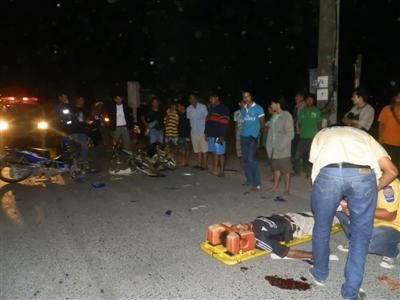 PHUKET: A Thalang man is in critical condition at Vachira Phuket Hospital after suffering head injuries sustained in a head-on collision between two motorbikes last night.

Thalang Police were notified of the accident at the Baan Lipon u-turn on Thepkrasattri Road at 9:15pm.

Rushing to the scene with Kusoldharm Foundation workers, they found 40-year-old Chamni Ninyang lying unconscious on the pavement surrounded by onlookers.

The other party to the accident, Wikanda Muankhamla, was only slightly injured.

Miss Wikanda, who appeared to be in her late 20s, told police she was heading southbound towards the Phuket Heroines’ Monument when the late model Honda Dream ridden by Mr Chamni cut across her path. She didn’t see the motorbike approach because its headlight was not illuminated, she told police before being sent to hospital for treatment.

Neither party to the accident was wearing a crash helmet at the time.

Both motorbikes were very badly damaged in the crash.

Rescue workers gave Mr Chamni oxygen and carefully placed him on a stretcher with a head brace, then rushed him to Thalang Hospital. Doctors there told rescue workers his vital signs were stable and he stood a good chance of survival.

A rescue worker at the scene said Mr Chamni’s most serious injury was a large wound to his head, which hit the pavement hard. He also suffered a broken arm and other injuries.

“He would have been spared such serious injury had he been wearing a crash helmet,” he observed.