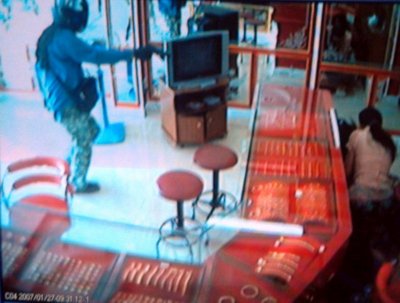 PHUKET: A 300,000-baht reward is on offer for information leading to the arrest of a brazen bandit who made off with gold jewelry worth more than one million baht in a daylight robbery on Saturday.

Officers report they have been following tips called in by a woman claiming to be the robber’s girlfriend, scouring the areas where she said he has been hiding, but without success.

Suthathip Jedipram, 28, an employee at Thongroj gold shop, in Dowroong Villa on Chao Fa East Rd, said that the robber walked into the shop, took out a gun and shouted at her and the other employees not to call for help or set off the alarm.

The robbery lasted about three minutes.

The robber looked thin and was wearing a denim jacket, camouflage trousers, a helmet, gloves and a long hair wig. He rode a motorbike without a license plate, she said.

Pol Maj Gen Decha Budnampetch, Commander of Phuket Provincial Police, told the Gazette, “The robber walked into the shop just 30 minutes after it opened, and at that time there were about three or four employees there. Nobody was hurt during the robbery even though the robber showed a gun.

“The shop lost about 107 bahtweight of gold, estimated to be worth more than one million baht. We have checked their CCTV to try to see the robber’s face and more details so that we can arrest him.

“We believe it might be the same person who committed another robbery in 2006, because he used the same method.”

In that robbery, a lone gunman walked into BR Gold Shop, at the entrance of Dawroong Villa, wearing a full-face helmet, jacket and olive-colored pants. He took gold jewelry worth about 500,000 baht from the store before fleeing on a motorbike without a license plate.

In both robberies, no one was injured but the robber was able to ride off within minutes of entering the store.

Pol Lt Col Sompong Boonrat, Deputy Superintendent of Phuket City Police Station, reported that a woman from Bangkok called with a tip that the robber was hiding in Rawai.

Police searched the area, he said, but have yet to find the robber or his loot.

“I believe that he might still be hiding in Phuket and we have instructed officers at the Tah Chat Chai checkpoint and the airport to keep a sharp eye out for anyone fitting his description.

“We might have a good chance to arrest him if the person reporting the tips is legitimate,” Lt Col Sompong said.

Police are expected to release a sketch of the suspect’s face soon.

A 300,000-baht reward is on offer for information leading to the suspect’s arrest.

The Thongroj gold shop has put up 200,000 baht of the reward money, with the remainder to be paid by donations from the Phuket Goldseller’s Association.

An application was made for special investigators from Police Region 8 headquarters in Surat Thani to join in the manhunt.

Heartthrob DJ shot through the heart