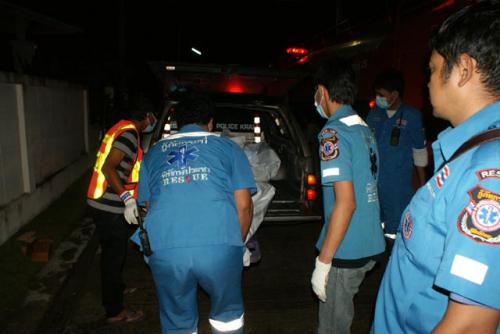 PHUKET: Jealousy and his stepson’s obsession with the internet drove an Australian real estate agent to burn down his house around him with his family inside, the man’s wife told Krabi Town Police.

Naruthai Port, recovering in Krabi Hospital from serious burns across 60 per cent of her body, told police that Australian Richard Port locked all the doors to prevent anyone from escaping and then started the fire.

Ms Naruthai, 38, was rescued from the flames. However, Mr Port, 72, and his stepson Worraphat Sukkaew, 17, both died in the blaze (story here).

“Before he started the fire, we had an argument about my son playing around on the internet instead of reading books – he was also a very jealous man,” Ms Naruthai said from her hospital bed.

“He then cut the line to the cooking-gas cylinder and lit it to kill all of us,” she said.

“I tried to unlock the doors with my keys, but he had changed the padlocks and my keys didn’t work,” she said.

“Fortunately, rescue workers were able to save me. However, I’ve lost my husband and my son at the same time,” she said through her tears.

Lt Niwat Timkate of the Krabi Town Police confirmed that the case was still under investigation.