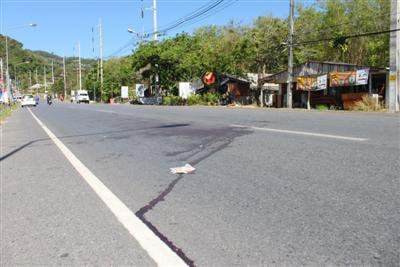 Matthias Andersson from Sweden died after falling three storeys at a resort in Karon, where he was staying with family members.

Staff at Vachira Phuket Hospital said the apparent cause of death was a head injury sustained in the fall, which occurred at about midnight last night.

Mr Andersson plunged from the third floor and crashed through a thin zinc roofing structure before hitting the ground, staff at Vachira Phuket Hospital in Phuket Town said.

His body was sent to Patong Hospital, then transferred to Vachira Phuket, they said.

Staff at the hospital did not know what caused the fall.

Separately, an Australian woman died and her companion is being treated at Vachira Phuket Hospital after the motorbike they were riding crashed head-on into another motorbike at about 3:30am in Chalong.

Lt Chianchai Douangsuwan of the Chalong Police said the accident occurred on Patak Road in Chalong, near the Shell service station.

He identified the surviving Australian as Kenneth Nathan Trivett, age 32.

Mr Trivett and his female companion were riding eastbound toward Chalong Circle when their motorbike hit a salaeng (motorbike with sidecar) selling grilled squid on the side of the road outside the Lamsing Hi-So nightclub.

The collision caused the motorbike to cross the center line and hit an oncoming motorbike driven by a man identified as Siriwat Phatkor.

The female Australian, who has yet to be identified, died from her injuries.

Mr Trivett, being treated at Vachira Phuket Hospital for head injuries, has not yet sufficiently recovered to provide the name of his deceased companion.

Mr Phatkor, who suffered only minor injuries, was treated at Phuket International Hospital.