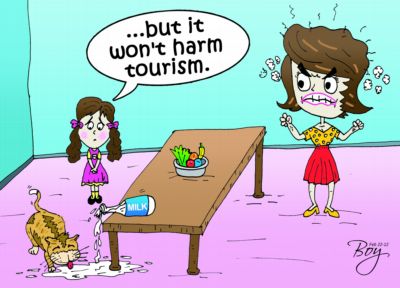 PHUKET: Since Phuket’s emergence as a tourist destination in the 1980s, the island has maintained a remarkable ability to attract foreign visitors, through good times and bad. Apart from the 2004 tsunami disaster, few events – locally, nationally or globally – have been able to buck the trend in any appreciable way.

Despite a seemingly endless series of ‘tourism threatening’ issues over the years, Phuket’s arrival figures have just continued to grow and grow. Expecting the trend to continue, industry leaders are now grappling with ways to get even more people here. Airport runway expansion and high-speed rail links are the latest projects talked about.

But regardless of Phuket tourism’s ability to shrug off all but the most catastrophic events, local leaders and their counterparts on the national stage continue to view each and every development almost exclusively in the context of tourism, with their eyes glued to the prism of that magical industry. In doing this, of course, they lose sight of the bigger picture, often embarrassing themselves in the process.

The reaction by some high ranking government officials to the bungling exploits of a group of would-be Iranian terrorists on Valentine’s Day is illustrative. Rather than dealing with what transpired in an open and factual manner, the scramble to downplay events was Pavlovian in its simplicity – and every bit as transparent as it was base in purpose. Some military officials even suggested that the bombs were “too small” to serve as real implements of terror.

This version of events would be a hard sell to anyone in the vicinity at the time. A better tack for the government would have been to note how quickly the police rounded up suspects, and/or to point out how the Iranians were somehow unable to obtain firearms, if assassination was in fact their motive.

Coming just four days and hundreds of hours of global media coverage later, the accidental release of a cloud of chlorine gas at poolside at a resort in Karon couldn’t have come at a worse time.

The words “blast” and “bomb”, incorrectly used by some local blogs and media outlets to describe how the release occurred, were picked up by news agencies around the world.

Basically under seige, the resort had to stress the truth repeatedly, that is that no explosion had occurred at all, and that the early media reports had been sensationalist, damaging not only the resort but also Phuket tourism as the “bomb” message reverberated across the globe.

However, ensuing messages from the venue to the effect that basically nothing had happened and that nobody was really injured, went beyond downplaying events. That information was false, and clearly more damaging than the truth.

Phuket Opinion: There’s an Elephant in the Room