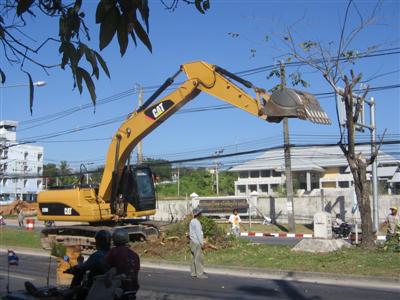 PHUKET: Construction workers this morning began work to remove the median strip in front of Phuket Bus Terminal 2 on Thepkrasattri Road in Rassada, raising hopes the long-dormant facility might go into operation soon.

Workers were at the site at 8am, putting up warning signs to alert motorists of the work, which will close two lanes to traffic during work hours.

The workers from the Chaiyakorn Company confirmed that they were working under a contract with the Highways Department.

However, after the terminal’s completion 26 months ago, neither Rassada Municipality nor the Phuket Provincial Administration Organization showed interest in operating the terminal. Left with no other choice, the Land Transport Office said it would operate the facility on its own.

However, further delays were caused when local residents led by Rassada Mayor Surathin Lianudom argued against breaking the median strip in front of the station on grounds of safety and to prevent traffic congestion.

Breaking the median strip and installing traffic lights was necessary because the station is located off the southbound lane of Thepkrasattri while all departing buses must head north.

Another option, to have the buses do u-turns further south in front of the Wanich family estate further south, was also seriously considered. However this idea, also a source of complaint among locals, was later abandoned as dangerous and impractical.

Local residents opposed to the terminal also complained that no public hearing was ever held to gauge local public opinion about the project.

Workers hired last year by the Highways Department under a 3mn-baht contract appeared at the site in October last year, only to have a work stoppage ordered by Mayor Surathin, who happens to live right across from the terminal. Mayor Surathin said the facility should never open as a bus station and suggested it be turned into a school to be run under the administration of Rassada Municipality.

At that time the residents filed a complaint with the Damrongtham Center, which acts as the provincial ombudsman’s office.

Mayor Surathin told the Phuket Gazette this morning that he was still fighting to have the work stopped, but said he was nothing he could do to prevent the workers from doing their job today.

He was collecting signatures for a petition that would be submitted to Provincial Hall and that 400 people had already signed, he said.

A case has already been lodged with the Administrative Court requesting a temporary work stoppage, but the court is not set to rule on the matter until March 6, he said.

Phuket Highways Office Deputy General Manager Sathaporn Sornchana earlier told the Gazette the project to remove a section of the median strip and install traffic lights and other appurtenances could be completed in about three months.