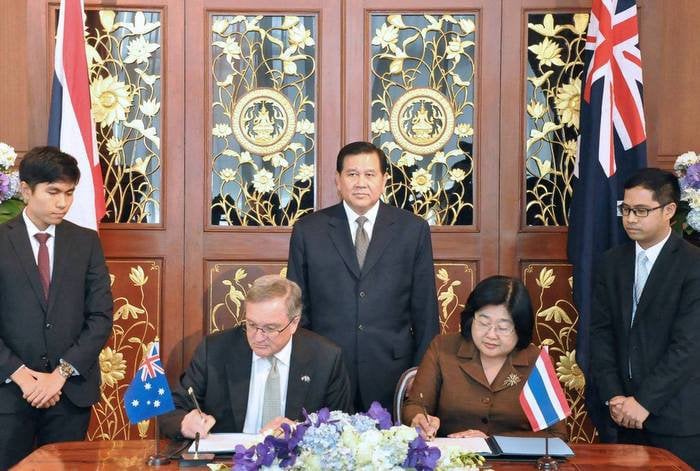 PHUKET: Thailand’s criminal-justice response to human trafficking received a boost from the Australian government yesterday, as an arrangement to commence the Australia-Asia Program to Combat Trafficking In Persons (AAPTIP) in Thailand was signed at a ceremony in Bangkok.

This signing marks a milestone in the implementation of AAPTIP – a program through which the Australian government has made a five-year commitment to strengthen the capacity of governments throughout Southeast Asia to enhance the investigation, prosecution and adjudication of trafficking crimes.

Human trafficking remains a serious concern for officials along the Andaman coast as people are taken from Myanmar to be sold in Malaysia, with the average person fetching about 80,000 baht, while women are sold for more, a human trafficker told Phang Nga officials earlier this month.

The revelation came after two men were arrested in a failed attempt to smuggle truck loads of Rohyingya through Takuapa, Phang Nga. After their arrest, the men confessed to having made the run several times before and having paid officials at checkpoints bribes of about 300,000 baht per truckload of people (story here).

“The task for countries such as Thailand and Australia is to continue turning our good intentions into practical protections for migrants and the most vulnerable in our communities,” said Australian Ambassador to Thailand HE Paul Robilliard at the signing yesterday.

“Australia believes that programs like AAPTIP provide a necessary mechanism to help do just that.”

Human trafficking remains a critical challenge to countries throughout Southeast Asia, and the Australian government has taken a leadership role in combating the trade alongside partner governments and community organizations in the region, a statement from the Australian Embassy in Bangkok read.

Together with partners from these agencies, the program will work to advance Thailand’s national anti-trafficking priorities, by enhancing cross-border co-operation among trafficking investigators and strengthening protections for trafficking victims, as they engage in the process of bringing their traffickers to justice, the statement read.

Despite Thailand’s recent efforts by the National Council for Peace and Order (NCPO) to counter human trafficking, the country remains ranked by the United States as among the worst for human trafficking (story here).

Thailand was downgraded to Tier 3, on par with Malaysia and Gambia, in the US State Department’s Trafficking in Persons (TIP) report earlier this year for failing to take steps to prevent human trafficking (story here).

AAPTIP builds on over a decade of Australian support for the anti-trafficking efforts of partner governments in Cambodia, Indonesia, Lao PDR, Myanmar, the Philippines, Thailand and Vietnam. AAPTIP also works at the regional level through Asean, supporting the anti-trafficking work of the Senior Officials Meeting on Transnational Crime.