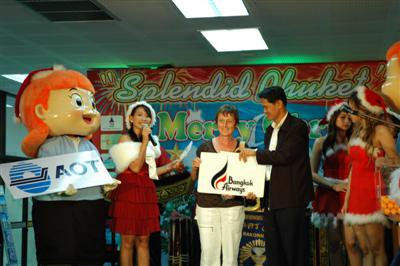 Phuket Governor Preecha Ruangjan, AOT Chairman Wuttipan Wichairat and Phuket International Airport Director Wicha Nernlop were on hand to preside over the activities, which included staged classical dance shows and gifts being given away in a lucky draw to passengers arriving aboard Thai Airways International flight TG 986 from Perth, Australia.

The event, intended to restore the confidence of foreign tourists in Phuket, was a last-minute replacement for a previously planned event to greet the airport’s 6 millionth passenger.

The milestone arrival of passenger number 6 million, projected to arrive sometime around Christmas, never materialized due to the unprecedented closure by People’s Alliance for Democracy protesters of Suvarnabhumi and Don Mueang Airports in Bangkok from November 25 to December 3.

Day of danger on Phuket roads