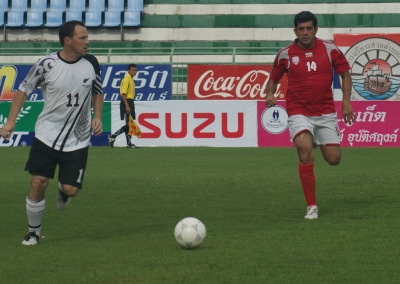 PHUKET: Australia and Iran will contest the final of the Seniors World Cup today at Surakul Stadium in Phuket Town after winning their respective semi-finals yesterday.

The match is scheduled to kick off at 6pm.

Iran and New Zealand contested the first semi-final, resulting in a comfortable 4-1 win for the Iranians.

The margin of victory allowed Iran to rotate their squad and rest key players, which could prove decisive given that the final is taking place the day after the semi-final.

Australia and Thailand met in the second semi-final in a rematch of the 2008 final.

Australia lost that game 1-0, but yesterday looked on course to gain revenge after only three minutes, when Peter Murphy gave them the lead with a well-placed shot.

This allowed the Aussies to sit back and defend their lead, which they never looked like surrendering.

TV personality Bin Bunluerit played on the right wing for Thailand and he came closest to scoring an equalizer when his over-hit cross had to be palmed over the crossbar by the Aussie goalkeeper.

The game was punctuated by regular interruptions as some Thai players fell to the ground at the slightest hint of a challenge, much to the displeasure of Australian manager Gary Marocchi.

Australia, comfortable in possession and organized in defence, ended hopes of a Thai fightback early in the second half when Peter Murphy tapped the ball in from close range after a shot had been parried into his path.

Aussie Zoran Barovic scored the third and final goal of the match when Australia broke the Thai offside trap and slid the ball to Barovic for the simplest of finishes.

Marocchi was delighted with his team’s performance. “I thought we played well. Thailand are a good team, but I don’t like the way their players feign injury. Iran are a good side and I am looking forward to the final,” he said.

Thailand and New Zealand will contest the third-place play-off, scheduled to kick-off at Surakul Stadium at 4pm.

Phuket to crack down on World Cup gambling