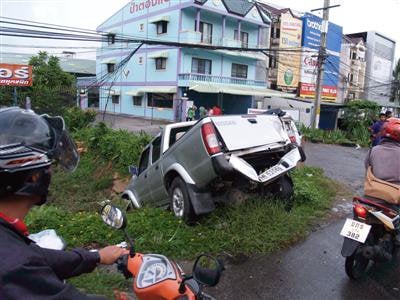 PHUKET: Slippery road conditions last night led to a five-vehicle pile-up on the bypass road that left one pick-up truck upended in a roadside drainage ditch and several people injured.

The accident happened at about 6:15pm in the southbound lanes, about two kilometers north of the Tesco-Lotus junction near the Thanachart Bank.

Just after light rain started, a motorcycle with a pillion passenger lost control in the left- hand lane, causing 27-year-old Jirawat Chuaybumrung to slam on the brakes of his green sedan to avoid running them over.

His car was hit from behind by a red pick-up truck carrying four passengers, all heading home from work at the time.

After that, a silver pick-up tried to swerve into the passing lane to avoid hitting the two vehicles in front, but was smashed hard on its right side by a large Laguna Phuket bus carrying 40 staff back to town from Cherng Talay.

The silver pickup, with 45-year old driver Usah Saenganun and four passengers, smashed into the red pick-up and ended up in a roadside drainage ditch.

Several people were taken to hospital, but there were no serious injuries.

Mr Jirawat, who was with his wife and seven-month-old baby, said, “We are okay, but the baby was a bit shocked.”

Accidents are a daily occurrence on the bypass road, which is currently being resurfaced. Completed in early 2006 under a 111-million-baht road building project, the surface has since become uneven and potholed.

Motorists, especially those on motorbikes, are advised to proceed with extreme caution while the work continues.