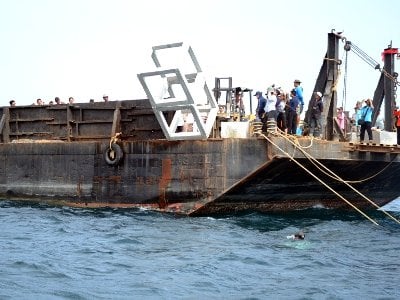 The ongoing project is funded by the Phuket Provincial Administration Organization (PPAO) and being carried out by the Phuket Marine and Coastal Resources Conservation Office (MCRC).

“There are 20 sites in Bang Tao Bay and Kamala Bay, all about three kilometers offshore,” MCRC Director Pitul Panchaiyaphum told the Phuket Gazette.

“The sites are not more the 20 meters underwater to ensure divers have good visibility of the reefs [to grow],” he explained.

The artificial reefs are expected to attract fish and other sea creatures within about one month, and to start growing corals after about three years, he said.

In addition to becoming attractions for divers, the reefs will be a boon for local fishermen. Artificial reefs established years ago are now havens for growing numbers of fish, providing local fisherman in some areas with record catches, Mr Pitul said.

The concrete cubes are also expected to deter illegal fishermen from entering the areas.

Measuring 1.5 meters along each side and weighing about one ton apiece, it is hoped the cubes snag large nets used by illegal fishermen.

The cubes are being placed in clusters of 80 to 100 cubes, with each cluster 500 meters to a kilometer apart. “If they were placed separately, they would not be very effective in stopping vessels from illegally fishing in the area,” said Director Pitul.

“We chose Bang Tao and Kamala bays because the areas are critical – there has been much illegal fishing in these waters,” he added.

The next bays to benefit from the ongoing project will be Kata, Karon and Nai Harn.

“We already have the budget from the PPAO. Now we are in the process of getting permission from the Marine Department,” he explained.

Before launching the project there, the MCRC must first conduct a survey to determine whether local ecosystems there would benefit from artificial reefs.

Public hearings would also need to be held to gain feedback from local fishermen, tour and boat operators.

“We still have to determine whether any reefs [installed there] would affect local fisheries,” he said.

“And we have to consider not only the local residents, but also business operators such as tourist boat operators and hotels because this project is to benefit everyone,” Director Pitul said.