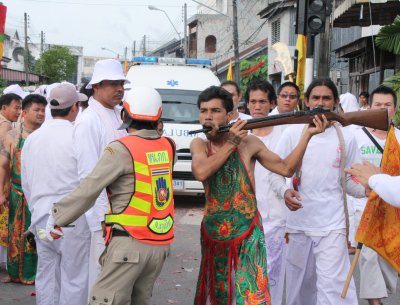 PHUKET: Final preparations are being ironed out for this year’s Phuket Vegetarian Festival, which will kick off with an opening ceremony at Saphan Hin Park at 9am on October 7. The raising of go teng poles to welcome the Chinese Warrior Gods down from their celestial abode will take place at participating shrines later the same day.

The ceremony “proper” starts with the arrival of the new moon on October 8 and runs until October 16.

Issues on the table at the meeting were shrine activities, traffic control, safety and security, medical support, firecracker control, price controls, sanitation and the shrine-visiting schedule of the new Governor.

It has not yet been announced who will succeed current governor Wichai Phraisa-ngop when his term expires at the end of this month.

Phuket Shrine Association President Prasert Pakthongpon said he has ordered the mah song (‘spirit mediums’ or ‘devotees’) to avoid piercing their bodies with “strange-shaped” objects. Exceptions will be made for “weapons of legend”, such as swords, axes, maces and 12-inch spikes with a miniature Chinese god-head at the top, he said.

In past ceremonies, mah song have been seen with piercings through the cheek ranging from parasols to fake M16 machine guns and plastic children’s shovels.

The Phuket Provincial Health Office has campaigned to have all mah song vaccinated for tetanus.

Phuket Police Commander Pekad Tantipong said firecrackers will only be allowed during street processions and that all firecracker vendors must have licenses. Lawbreakers will be fined, he said.

Mr Prasert would like to ask all participants – both Phuket residents and visitors – to wear white clothing during this “holy period”, which by devotees is marked by nine days of abstinence from sex, alcohol and eating meat.

In addition to the opening ceremony and daily processions of mah song spirit mediums, a special Chinese ceremony to wish health and happiness to HM King Bhumibol Adulyadej will be held at the Saphan Hin main stage area starting at 5pm on October 9.