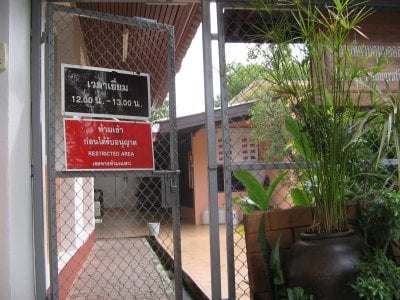 PHUKET: The Phuket Immigration chief today denied there have been any formal changes in the way Thai Immigration Police deal with foreigners who overstay their permits-to-stay or who are otherwise discovered to be residing in the Kingdom illegally.

Phuket Immigration Superintendent Panuwat Ruamrak admitted receiving “many” calls today following an online media report stating that foreigners who try to depart from Thailand at Bangkok’s Suvarnabhumi Airport face arrest and detainment if their permits-to-stay have expired by 42 days or more.

The report said people who had overstayed by 21 to 42 days fall into a “gray area” and may face possible arrest and detainment at the discretion of Immigration officers at the intended point of departure.

Those who overstay by fewer than 22 days can pay the fine at the airport and depart without having to worry, according to the report originally sourced to Pattaya One.

Col Panuwat today told the Gazette, “I contacted the legal department at Immigration Bureau Headquarters on Soi Suan Plu in Bangkok, the Phuket Airport Immigration Superintendent and other authorities as well.”

“All have assured me that they are still following all the terms of the Immigration Act 1979, enacted on February 29 that year,” he said.

Under the Act, “any alien who stays in the Kingdom without permission, or with permission expired or revoked, shall be punished with imprisonment not exceeding two years, or a fine not exceeding 20,000 baht, or both.”

“I am confused about how this kind of news is spread. It is possibly a misunderstanding,” he said.

Such misunderstandings may be the result of people who overstay not having enough money to pay the fine, a scenario that gives Immigration officers no choice but to arrest and detain them, he said.

Overstay fines in Thailand accrue at 500 baht per day to a maximum of 20,000 baht. As such, the policy does not encourage foreigners with long overstays to legitimize their immigration status once they have passed the 40-day threshold.

The alleged “Suvarnabhumi Crackdown” reportedly targets foreigners who take advantage of this by grossly overstaying their permits-to-stay and then turning up at the airport with 20,000 baht and an air ticket in hand, expecting to fly out of Thailand hassle-free.

Col Panuwat stressed that any new official changes in policy or regulations are posted on the Immigration Bureau’s official website: www.immigration.go.th.

He encourages tourists with questions to download a copy of the Immigration Act, which is also available online there.

The Phuket Gazette notes that Immigration officers at checkpoints have always had complete discretion on what punitive measures to take with overstays, as specified above.

They can also deny entry to anyone arriving at a border checkpoint for any reason, even if the person arriving is in possession of a valid visa.

This being the case, all foreigners are strongly advised to never stay in Thailand past the date specified in their permit-to-stay and to make sure they comply with all other provisions of Thai Immigration Law.

All systems go for Phuket Veggiefest 2010