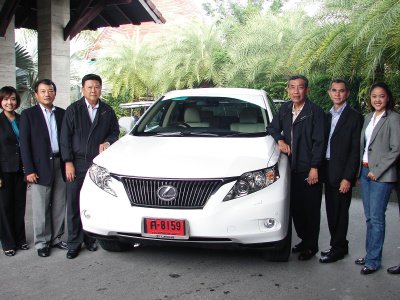 PHUKET: To mark the opening of its 10th service center in Thailand, at the Toyota Pearl showroom on Thepkrasattri Rd in Rassada, Lexus is now offering free test drives of all its models at Central Festival Phuket.

The promotional campaign, which runs until Wednesday, was launched by Toyota Motor Thailand Co Ltd vice-president Sittachai Jiratthanyasakul at the Indigo Pearl resort in Nai Yang earlier this week.

Lexus owners in Phuket will no longer have to waste time sending their cars to Bangkok for service, Mr Sittachai said.

“They will get the same service in Phuket as they do in Bangkok,” he said.

There were about 50 Lexus cars in Phuket and about 20 in nearby provinces, he added.

The center is one of 10 Lexus regional service centers in Thailand. There are also three in Chiang Mai, three in Khon Kaen, two in Ubon Ratchathani and one in Surat Thani.

The 10 centers are for Lexus models sold through authorized dealers only, said Mr Sittachai.

They will not service “gray” imports, he stressed.

Mr Sittachai revealed that Lexus has boosted sales in Thailand from 20 units in its first year, 2003, to an estimated cumulative total of about 3,300 vehicles by the end of this year.

Lexus has sold 180 cars so far this year, he said, adding that he was confident the launch of the new RX270 would fuel sales to help meet this year’s annual sales target of 300 units.

Adul Tungsuwan, deputy general manager of the Lexus Group Department in Bangkok, said members of the public who want to take a Lexus on a test drive must possess a valid driver’s license and promise to drive carefully.

They needn’t worry about cost of damages if an accident does occur, however, because the model cars come with accident insurance from the company, he said.

Those who fall in love with the top-of-line Toyotas should be forewarned, however: when the new RX270s arrive they will range in price from 3.79 million to 4.09 million baht.

All systems go for Phuket Veggiefest 2010

Phuket braces for another anti-smoking crackdown