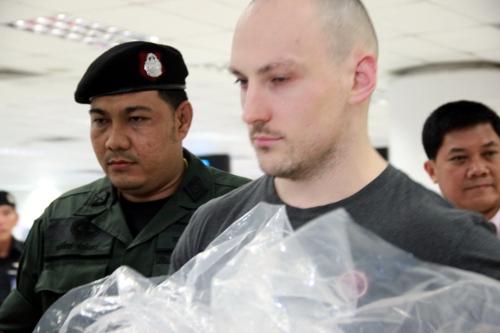 PHUKET: The trial of British national Lee Aldhouse, charged with the murder of former US Marine Dashawn Longfellow in Phuket in 2010, has yet to be put in motion as the Phuket Prosecutor’s Office is awaiting the arrival of further documentation from the UK, the Phuket Gazette has been told.

Aldhouse confessed to police to stabbing Mr Longfellow, but denied any intention to kill him.

He arrived at Phuket Airport on December 1 after being extradited from the UK, and was transferred to Phuket Provincial Prison, where he is being detained until his case is presented to the court.

Aldhouse has been charged by police and has been placed in custody of the court, but has yet to have the charges formally read against him.

“He is still being detained at Phuket Prison because we have not yet presented the case file to the court. We are waiting to receive formal documents from the authorities in the UK,” Phuket Provincial Prosecutor Tawan Suknirundorn told the Gazette.

The document will report the total time Aldhouse was detained in the UK before being handed over to the Thai authorities.

The length of time Aldhouse was detained by the UK authorities will come into consideration in handing down the sentence to be served if the court finds him guilty, Mr Tawan explained.

“The UK court dispatched the documents to us on Tuesday. We expect to receive them by Monday,” he said.

“We should be able to file the case with the court before December 26,” he added.

Phuket Sports: Fergie scoffs at talk of retirement for trio