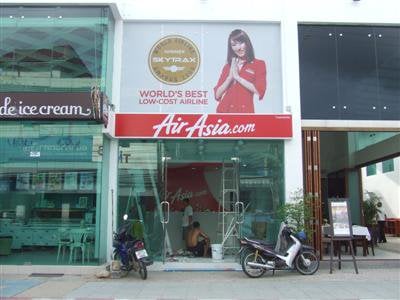 PHUKET CITY: As part of its plan to develop Phuket as a second aviation hub for Thailand, Thai AirAsia hopes to establish direct air links with major cities in the region and will set up a sales office on the beach road in Patong, the company’s chief executive officer (CEO) told the Gazette.

Thai AirAsia CEO Tassapol Bijleveld says that the carrier wants to help decentralize air links so that more passengers in the region can get to destinations in Thailand without having to transit through Bangkok.

Phuket will be the first of a number of new aviation hubs the carrier hopes to establish in Southeast Asia. The Phuket hub will eventually make it possible for people to fly directly from the island to regional destinations such as Hong Kong, Macao, Singapore, Jakarta and Ho Chi Minh City.

People in Indonesia wanting to visit Phuket currently have to get two connecting flights  before reaching the island. A scheduled service from Jakarta to Phuket would reduce travel time to about one hour, he added.

However, it was still too early to announce which other airports in Thailand and around the region were likely to be upgraded to aviation hub status, Mr Tassapon said.

More specific details about the carrier’s regional expansion plans will be released later this year, he added.

Servicing the Phuket hub will be some of AirAsia’s current fleet of six Airbus A320s. Thai AirAsia currently operates nine Boeing 737-300 aircraft and six Airbus A320s, which are among 40 brand new A320s ordered to gradually replace the 737-300s and expand the fleet.

The first of these A320s was delivered in October 2007, while the remainder will be handed over by 2012.

Mr Tassapon told the Gazette before the recent turmoil in Bangkok that he “definitely” expects tourism to Phuket to not only recover, but to expand.

However, AirAsia has no immediate plans to use Phuket as a hub for long-haul international flights such as its popular Kuala Lampur-London route, he said.

A source at Thai AirAsia said the carrier was not badly affected by the recent riots in Bangkok because most passengers had booked and paid for their flights long before the protests turned violent.

AirAsia’s new ticket office in Patong is slated to be open by the end of the month.

The carrier also operates a ticket booth in the food court on the second floor of the Tesco Lotus shopping mall.